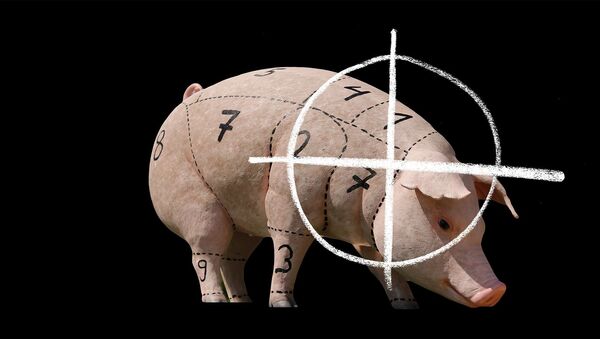 New Delhi (Sputnik): India’s northeastern states have been hit by an African swine fever outbreak which has resulted in the death of over 15,000 pigs. The impact of the disease is increasing day by day. So far, over 17,000 pigs have died due to the African fever, Indian officials have said.

China’s state media reported on Thursday that the nations customs has now imposed a ban on pigs, wild boars and related products from India to prevent the arrival of African swine fever.

#China is to ban the import of pigs and wild boars and related products from #India to prevent African swine fever coming into China: Chinese Customs pic.twitter.com/uHqYJ2nO0f

​India normally exports around 500,000 tonnes of pork meat every year, and a large amount is exported to China, the biggest pork meat consumer in the world. Due to Swine flu and African fever, China has been facing a pork shortage, as domestic production isn't sufficient to fulfil the local demand. Earlier this year, China had also banned the import of pork meat from Indonesia due to African fever.

China banned direct purchases of buffalo meat from India in 2001 following the outbreak of foot-and-mouth disease in the South Asian country; in 2019 China also banned the illegal trade of buffalo meat, which has hit the biggest exporter of buffalo meat hard.

The ban on pigs, wild boar and related products has come after the northeastern states in India reported over 17,000 deaths of pigs due to African swine flu, which according to experts doesn't risk infecting humans. The government in India's Assam state has lifted a blanket ban on the sale of pork to ensure that piggeries do not bear further losses.

Indian officials suspect that the flu arrived in India’s Arunachal Pradesh, which shares a border with China, where it had spread to Assam via Tibet; the Indian state of Assam has largest population of pigs in the country.

The experts at the Asian Development Bank have estimated that African swine fever (ASF), which was first reported in China in August 2018, has cost Asia between US$55 billion and US$130 billion, including as much as US$77 billion in lost revenue. The countries affected due to the outbreak include China, Mongolia, Vietnam, Cambodia, Myanmar, the Philippines, Republic of Korea and Indonesia among others.