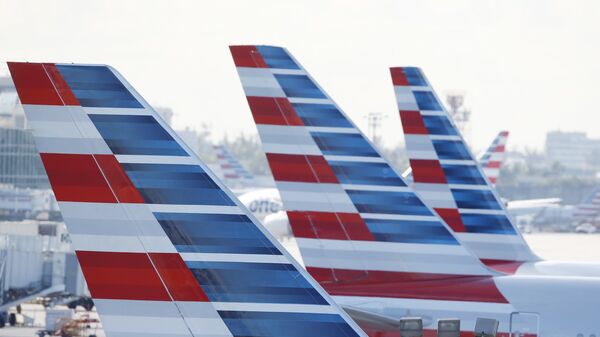 Demond Cureton
All materialsWrite to the author
Three major airlines have announced plans to slash 30 percent of its workers over fears that post-COVID-19 recovery efforts may take longer than expected, it was reported this week. The news follows profit warnings issued from two key British carriers in April, who plan to cut up to 15,000 jobs.

US carrier American Airlines will announce it expects to slash roughly 30 percent of its workforce, a letter to employees made public revealed on Thursday as reported by Reuters.

The airline hopes to make some layoffs voluntary via two redundancy packages, View From The Wing reported.

Involuntary redundancy will include three months of severance, one year of travel benefits and no support for COBRA health benefits, with payroll ending on 1 October, but senior employees will receive separate offers, the report added.

United Airlines, a competitor to American, said that it would also need to cut management and administrative staff by 30 percent, Reuters reported.

American Airlines would also "plan for operating a smaller airline for the foreseeable future" executive vice-president of People and Global Engagement Elise Eberwein wrote in a statement in the letter.

The news comes as UK low-cost carrier EasyJet announced on Thursday it planned to cut roughly 30 percent of its workforce amid market turmoil in the aviation industry from the ongoing COVID-19 pandemic.

"We realise that these are very difficult times and we are having to consider very difficult decisions which will impact our people, but we want to protect as many jobs as we can for the long-term," Johan Lundgren, easyJet chief executive said in a statement, adding that the company would launch an employee consultation "over the coming days".

The news comes as the budget carrier implements numerous measures, including restarting flights on 15 June and deferring delivery of roughly 24 out of 131 aircraft expected up to 2023.

The decision was approved despite founder and key shareholder Stelios Haji-Ioannou voicing objections in an open letter in early April that the company should cancel the orders.

Lufthansa subsidiary Eurowings also said it would cut roughly a third of its workforce at its headquarters in Düsseldorf, despite the German government renationalising the carrier with a €9bn bailout package, View From The Wing reported.

“We have around 1,000 staff at head office, and of these we will reduce 300,” Eurowings' chief executive, Jens Bischof, said at an online event on 25 May, adding a return to pre-COVID19 capacity was expected around 2023.

The news follows statements in April from Lufthansa that it would need to shed 10,000 staff, as 10 percent lower yields and load factors were expected amid some of the largest losses in the company's 65-year history.

The news comes after Boeing chief executive David Calhoun said in an interview in May that air travel may not return to normal in 2020, adding he expected a major US airline would "most likely" fold in September.

Boeing announced on Wednesday it would slash 12,000 workers over the next few weeks, with 7,000 jobs set to be axed this week due to the pandemic and fallout from the 737 MAX crisis, which killed 346 passengers on two flights.

The International Air Transport Association said found that limited air travel would resume in the second half of 2020, but it did not expect international services to restore, resulting in a $314bn drop in industry revenues. Multiple carriers such as Virgin Australia, Monarch Airlines, Flybe, LATAM US, and others have fallen into administration over market volatility due to Brexit and ongoing pandemic.