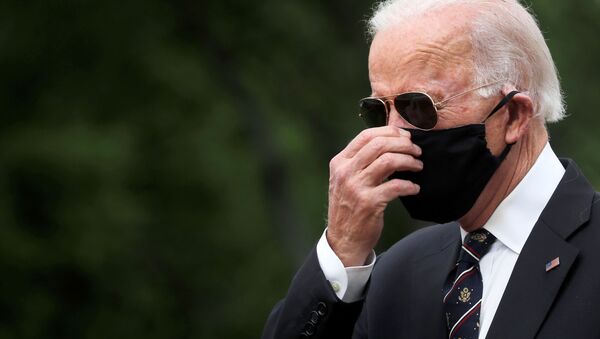 Muhammad Osman
All materialsWrite to the author
Joe Biden, the apparent Democratic nominee for November's election, has said that "you ain't black" if you're an African-American voter and are still undecided. He backtracked on the comment after drawing a backlash from the Trump camp.

The T-shirt costs $30 and features the slogan #YouAin'tBlack - a reference to Biden's recent comment that those black people who cannot decide whether to back him or Trump are, in fact, not black.

The description of the shirt features a photo of a black model next to a Trump campaign video with the stamp "Racist" across Biden's face on the thumbnail.

"Joe Biden actually told Black Americans they 'AIN'T BLACK' if they support President Donald J. Trump!," it reads. "Sport this shirt and make sure NO ONE forgets the words #YouAintBlack came out of Joe Biden's mouth!"

The presumptive Democratic nominee made the remark during an interview with popular African American radio host Charlamagne Tha God last week. It immediately prompted a storm of criticism from Trump's supporters, including the black community, and Biden apologised by saying he shouldn't have been so "cavalier". He also said that he would never “take the African American community for granted”.

Black voters are seen as a key demographic for Biden, a close ally of Barack Obama, and are credited with helping him revitalise his once-struggling campaign after the South Carolina primary and all but secured his nomination.

The former vice president has committed to picking a female running mate, and two of the rumoured leading contenders, Kamala Harris and Stacey Abrams, are black.

Charlamagne Tha God pressed Biden on reports that he is also considering Amy Klobuchar, who is white, for the pick and told him that African American voters “saved your political life in the primaries” and “have things they want from you”.