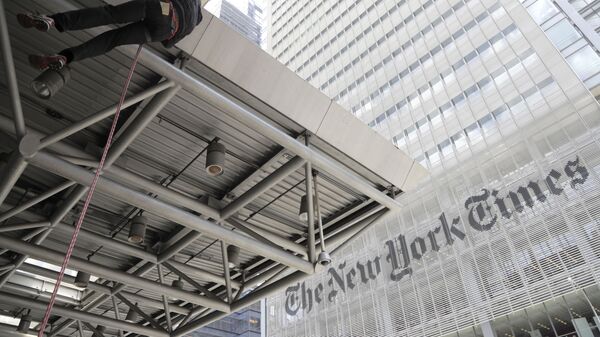 © AP Photo / Julio Cortez
Subscribe
International
India
Africa
MOSCOW (Sputnik) - One of the awards the newspaper received was the 2020 prize for international reporting with a series of articles that proclaimed to show the "predations" of Russian President Vladimir Putin’s "regime."

US President Donald Trump has called on the New York Times newspaper, which won three Pulitzer Prizes on 4 May, to return the awards for biased coverage and falsifying sources. Late on Tuesday, Trump took to Twitter to slam the daily for its coverage of former Special Counsel Robert Mueller's investigation into alleged collusion between the Trump campaign team and Russia. The probe ended in 2019 and found no conclusive evidence of collusion.

​The New York Times has faced criticism in Russia over its alleged misreporting of several events, including the ongoing COVID-19 outbreak. On 12 May, the newspaper published an article entitled "A Number Defies Propaganda: 1,700 Extra Deaths in Moscow," which claimed that the Moscow authorities were downplaying the number of deaths resulting from the coronavirus disease.

Russian Deputy Prime Minister Tatyana Golikova rejected that Russia has manipulated the epidemiological statistics, and WHO Representative in Russia Melita Vujnovic confirmed that there has been no deliberate underestimation of COVID-19 mortality in the country.