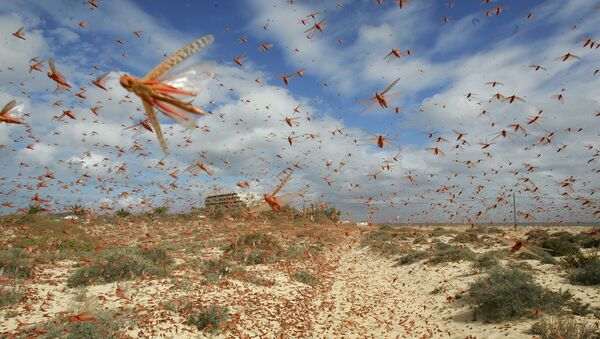 New Delhi (Sputnik): Struggling to contain the pandemic, India is now facing an additional challenge to deal with the worst locust attack in decades. This second wave of crop-munching insect in the agricultural belts in India has jeopardized the prospects of farmers already reeling under economic pressure due to the COVID-19 lockdown.

A massive swarm of locusts that has entered India from Pakistan has been largely projected as second plague as it has destroyed agriculture produce in western parts of the country.

United Nation's Food and Agricultural Organisation (FAO) had issued an advanced warning that more groups of locust swarm are expected to move towards Indo-Pak border until early July as breeding continues in southern Iran and southwest of Pakistan. This second wave of locust is expected to be 20 times more damaging that the first one in December-January 2019.

Devinder Sharma, food security and agriculture expert, tells Sputnik that pandemic-induced lockdown and locusts are a deadly combination for farming communities in India and there is a need to immediately swing into action for providing relief to these farmers.

The expert said it was already difficult for farmers to get just prices for their agricultural produce during the lockdown and the locust invasion would has now devoured their standing crops leading to further economic losses.

Awaiting a relief package from the Modi government, infestation affected states such as worst-hit Rajasthan and Gujarat have rolled out state specific relief for farmers and have urged the federal government to step in.

Rajasthan state Chief Ashok Gehlot has also written to Prime Minister Modi for help, asking him to declare a national emergency with an immediate effect. The situation in worst in Rajasthan, where crops have been under attack from locusts since April - 22 of its 33 districts are under locusts attack.

FAO has predicted loses for winter crops (Kharif) which include like wheat and potatoes to be $2.2 billion and nearly $2.88 billion for summer crops (Rabi) such as sugarcane and rice.

Dushyant Nagar, Farmers' Union Leader, told Sputnik, "Indian farmers are doomed I would say. The standing green crop is the favourite food of locusts. This would not only have detrimental economic impacts on farmers, but there livestock as well as this is the fodder for them."

India has been witnessing continuous incursion of Desert locust from border areas of Pakistan since 21st May 2019 on-wards. The Indian agricultural ministry said that that locust devoured one-third of the crops in nearly 88 percent of the 168,548 hectares of Indian farmland affected by the swarm.

Dushyant informed that they have written a letter to Prime Minister Narendra Modi and former chief of India's opposition Congress, Rahul Gandhi, asking for help stating that farmers aren't capable of dealing with the migratory pest attack by themselves.

"We want the government to provide pesticides at gram Panchayat level (village governing body) and monetary compensation for farmers for damage caused by the locusts," the union leader said.

High resentment also prevails against the central government for not sparing a dedicated package for farmers in its 20-lakh crore ($270 billion) lockdown relief. Now the locust infestation will put an additional burden on farming communities.

The Indian Environment Ministry has said that the locusts from Pakistan have entered India earlier than their normal time of June and July. The Ministry informed that the states are adopting various means such as usage of drones, spraying pesticides and beating drums to control the swarm of locusts.

"In 2018, more rainfall has been witnessed in desert areas, Middle-East, Horn of Africa and Gulf countries because of which locusts bred in huge number and now have travelled to India. We also can't disregard the cyclonic effect which led to the change in wind direction," he said in a conference in Rajasthan.

However, on a positive note, Agarwal said that the second biggest locust wave is nearing its end and the locust swarm and its residual population will gradually die a natural death. Nevertheless, Agarwal emphasised that a large scale locust wave like this one requires massive cooperation among countries.

India has been in talks with Iran and Pakistan for cooperation to contain the menace of locusts and also offered pesticides to the countries. Indian government sources said that Iran responded positively on the offer, Pakistan is yet to reply. While drones are being deployed in India, the country has also new machines have been ordered from the UK which are said to arrive soon.

Locust invasion is not a new phenomenon for India, but it has never been this intense in past few decades. However, the agricultural expert Devindra Sharma feels that because the alarm was sounded much before the invasion of the locusts, the government could have been better prepared.

"You cannot stop a locust in mid air. However, preparedness matters at this point. This is an emergency situation and we require set protocols. We cannot take it lightly," he pointed out.

Locusts which can be destroyed only when they settle at night, breed in places with high humidity and heavy rainfall - Kenya, Iran, Horns of Africa and more. According to FAO, locusts are breeding 400 times more than usual and can travel over 150 kilometers a day.

"Whenever the swarms are detected, it should be destroyed immediately. Other methods of containment are being deployed but they are not as effective as chemical processes, which completely annihilate the locusts," the director said.

The Indian government also informed that Locust Control Offices are working since April 11, 2020 with spray equipment/vehicles, in coordination with officials of District Administration and State Agriculture Department.

The swarm of locust on Tuesday invaded the Maharashtra state and headed towards Uttar Pradesh. As a result, an alert has also been sounded in the national capital Delhi as the swarm is expanding its area.

Locusts are migratory insects that breed quickly. The attack is currently carried out majorly by desert locusts which are most devastating of all. They eat the quantity of food equal to their weight (2 grams), and can devour food eaten by 2,300-3,500 people in a day.