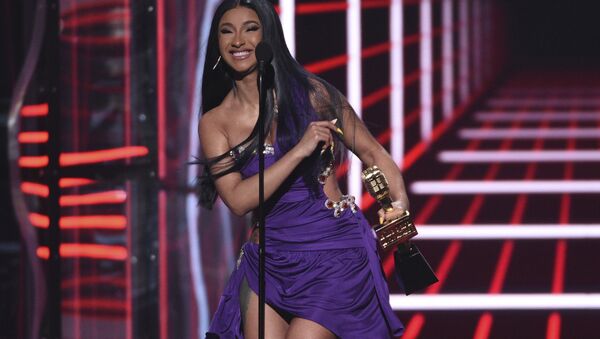 © AP Photo / Invision / Chris Pizzello
Subscribe
International
India
Africa
The co-author of the pandemic anthem “Coronavirus Remix” has never tried too hard to hide her true emotions about the ongoing health crisis and this time the singer went as far as to share with the audience her body’s reaction to the continuing lockdown measures.

American rapper and social media star Cardi B has just sent some laughs around Instagram after her last video showed the musician’s rounded curves as she tried to highlight the apparent disadvantages of ongoing quarantine.

The singer started her clip by boldly advancing towards the camera in a black bikini that only highlighted her famous curves. However, the mother-of-one then did something unexpected and “breathed out” the plump belly that she was earlier trying to keep smooth.

“Suck it in life”, Cardi B succinctly captured the video, that landed more than 11 million views just in a couple of hours.

And her honesty was highly appreciated, not only by her fans but also by many other public figures, with some even branding her “Cardi the truth”.

“Me everyday”, wrote B. Simone, actress and social media celebrity.

“It was Quarantining”, another user commented while accompanying his message by laughing emojis.

“I know the feeling believe it or not!”, someone else replied.

Some fans however rushed to suspect that the wife of rapper Offset could be pregnant with another child and the video was just a way of announcing the news to the world.

Viral
'Sounds Like a Bad Dream!' Netizens Peeved as Bernie Sanders Approves Cardi B's Political Ambitions
Cardi B made no comment on this guess.

Cardi B made some headlines this spring after repeatedly expressing her feelings about the ongoing coronavirus pandemic by, for example, claiming that she should have been “eating sushi in a restaurant” rather than spending time at home. Some of her most vocal stunts have even been bundled into “Coronavirus Remix” by DJ iMarkkeyz, bringing the singer some additional fame and no doubt some extra cash also.