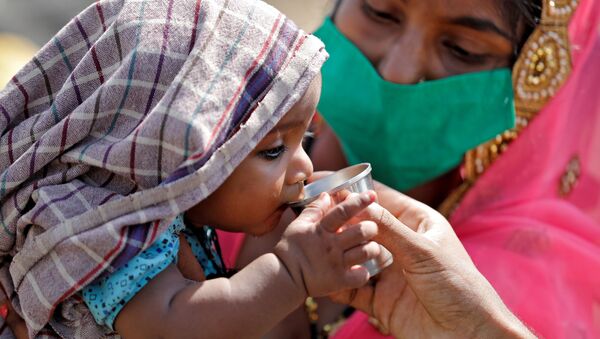 New Delhi (Sputnik): While the World Health Organisation (WHO) has urged people to wash their hands frequently to keep the coronavirus at bay, people in the remote villages of India's desert state, Rajasthan, are struggling to even find drinking water due to an intensifying heatwave.

Residents in far-flung areas of India's Rajasthan, a state with 61% desert cover and home to the Thar Desert, has been facing an acute water shortage due to a sweltering heatwave. The state recorded a maximum temperature of up to 47 degrees Celsius on Tuesday.

Villagers in Ati of the state's Barmer region said they are facing an acute shortage of drinking water as the water level of the only source in the village, a handpump decreases in the day time, reported the ANI news agency.

Rajasthan: Residents of Ati village in Barmer say that they are facing acute water crisis, as the water level of the only source in the village - a handpump, lowers during the day due to heat, forcing them to fetch water at night. (25.05.2020) pic.twitter.com/EG2Ew007LY

The villagers wait until night to fetch water and the supply continues for only 10-14 minutes, often leading to fights among people for their turn.

"The women keep waiting here at night. Our livestock is also thirsty, some birds and animals have died. We request the govt to make artificial water bodies for animals and make arrangements for us too", the report quoted a local as saying.

The situation in the village of Bhachbar, near the Barmer district, is also critical as the villagers there have been forced to drink murky water from pits.

The India Meteorological Department (IMD) warned of the heatwave intensifying and peaking on Tuesday in the northern states of Haryana, Rajasthan, Uttar Pradesh, and the cities of Chandigarh and Delhi besides some parts of Madhya Pradesh. It added the hot spell will continue to prevail until 28 May (Thursday) with peak intensity on 26 May.

Heat wave likely at
a few places over Haryana, Chandigarh & Delhi, West UP, East Rajasthan & MP and at isolated places over Punjab & East UP on 27th May. Heat wave conditions also likely over Bihar, Jharkhand, Odisha, Marathawada, Madhya Maharashtra during next 2-3 days.
2/2

An orange warning alert was issued for parts of Delhi on Tuesday with the capital recording a maximum temperature of 45 degrees Celsius. The weather bureau has said northern India will see a respite from the blistering heat on 29-30 May 29, with approaching dust and thunderstorms.

​The maximum temperature on Monday breached the 46-degree Celsius mark in Delhi and Rajasthan’s Churu district recorded the highest temperature of 47.5 degrees Celsius.