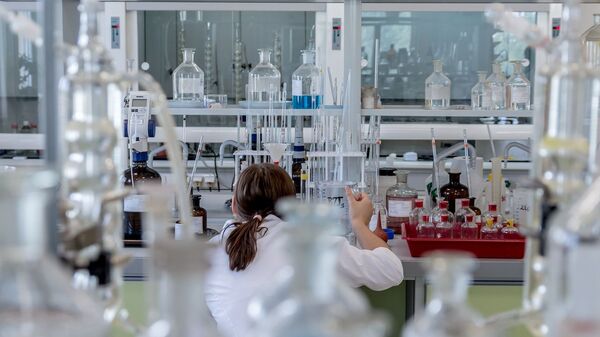 Tim Korso
All materials
Cooperation between the two countries was officially aimed at preventing the proliferation of weapons of mass destruction in post-Soviet states, as many of them inherited reserves of biological and chemical weapons.

The US Defence Threat Reduction Agency (DTRA), a subsidiary of the Department of Defence, worked with Ukraine between 2005 and 2014 to build or modernise the country's laboratories to be suitable for storing and working with dangerous pathogens, such as those used in biological weapons, documents, obtained via an official request to the Ukrainian government by website Ukrainian News, show.

At least eight such laboratories were built or modified under a contract won by Black & Veatch, a major American engineering company, according to the Ukrainian government's response cited by Ukrainian News. On its website, Black & Veatch confirm winning the contract from DTRA and building at least two Biological Safety Level 3 (BSL-3) laboratories in the Ukrainian cities of Kiev and Odessa.

"The BSL-3 laboratory was specifically designed and constructed to support work with especially dangerous pathogens that can be naturally occurring or introduced through a bioterrorism attack. It serves as a central location for research, consolidation, and training on the proper handling of dangerous pathogens", Black & Veatch says about the capabilities and purposes of the laboratories built in Ukraine.

According to the documents cited by the Ukrainian media outlet, similar laboratories were built in the Vinnytsia, Dnepropetrovsk, Transcarpathian, Lvov, Kharkov, Kherson, and Ternopol regions of the country under DTRA's Cooperative Threat Reduction programme. Officially the DTRA says that the programme aims at preventing the proliferation of the weapons of mass destruction, with one of its directives targeting the post-Soviet expanse where many countries retained their arsenals of biological and chemical weapons after the dissolution of the USSR.

DTRA's operations in Ukraine were put on hold in 2014, but resumed in 2016, Ukrainian News reports citing documents. Between 2016 and 2019 Black & Veatch built an Electronic Integrated Disease Surveillance System (EIDSS) and Pathogen Asset Control System (PACS) in Ukraine under a contract from the American agency, the engineering company's website confirms.

Apart from preventing the proliferation of WMD, these systems also aimed at consolidating and securing "dangerous biological agents, materials, and related technology" in Ukraine, the engineering company's website reveals.

The new stage in cooperation between Ukraine and the US in hazardous biological agents kicked off after opposition forces managed to stage a coup in the country and overthrow the government of elected President Viktor Yanukovych. At the time, the opposition received widespread support, including economic assistance, from the West. The US also provided support and Kiev has largely been following Washington's foreign policies, especially regarding relations with its neighbour, Russia, since they seized power.