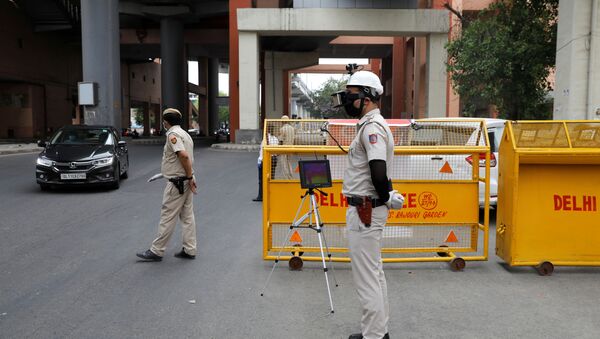 Nair N.B.
Sputnik correspondent
All materialsWrite to the author
New Delhi (Sputnik): India extended the national lockdown to contain the spread of COVID-19 for a third time on 17 May, but with certain relaxations. As of now, it will end after 31 May. Despite placing its entire population under lockdown, the caseload in India has now surged to 145,380 to be among the top 10 countries with the most cases.

Public health experts in India have endorsed the national lockdown due to the mounting caseload of COVID-19 in the country. They said that the lockdown has helped the country prepare for an unknown “enemy”, but there were certain slips-up which resulted in the migration of thousands of daily wage workers, many trudging hundreds of kilometres on foot.

“The lockdown has certainly helped contain the spread of COVID-19”, asserted Professor K.N. Panikkar, a former adviser to the World Health Organisation and professor emeritus at the Amrita Institute of Medical Sciences and Research Centre at Kochi, Kerala.

“Unlike Kerala, there was lack of commitment in other states to implement the guidelines of lockdown. Lockdown alone would not have helped or control the spread and reduce the infections. It is one of the tools to contain COVID-19”, Professor Panikkar told Sputnik.

Concurring with Panikkar, Professor K. Srinath Reddy, president of the Public Health Foundation of India – a national training, research, and policy development organisation in the area of public health, said lockdown has given the country time to prepare itself to take on the health emergency

“The lockdown has certain reasons – whatever may be the other reasons, it has given us time to prepare. It is the ultimate form of physical distancing. It gave time to the health system and to some extent the social system to prepare”, said Professor Reddy.

“Creating awareness about the pandemic at grass-root level, tracing of suspected infections, their contacts and confining them into some sort of quarantine should have been implemented vigorously. This has helped Kerala to contain the spread of COVID-19, unlike other states”, Professor Panikkar explained.

The first case of COVID-19 in the country was detected in the southern state of Kerala on 30 January. But the state immediately declared a health emergency and put its public health infrastructure on alert to identify infected patients, confine them, trace their contacts, and take effective surveillance measures.

As of Tuesday, there were only 896 cases in the state, which included 532 recovered cases and five deaths. After the state opened its borders for the return of a large number of non-resident domiciles, there has been a surge in positive cases of COVID-19 in Kerala.

India’s federal government claimed that the lockdown had averted up to 78,000 deaths. According to data released on Friday 22 May by Vinod Paul, member of the country’s official think tank Niti Ayog, the first two phases of the lockdown between 25 March and April 14 prevented between 1.4 and 2.9 million positive cases.

But to assume that the lockdown has averted a surge in positive cases is “a big stretch of imagination and too many assumptions”, he added.

The public health expert, however, said that if the lockdown was handled differently, India could have averted the migration of thousands of daily wage-earning workers, who lost their livelihoods after the abrupt announcement of the lockdown.

“It was very unfortunate. We should have handled it differently. We should not perpetuate the stigma that they are virus carriers”, he told Sputnik. He suggested that it is now time for India to ease the lockdown norms “To get us back to some form of resuming of life, both for economic and social activities”.