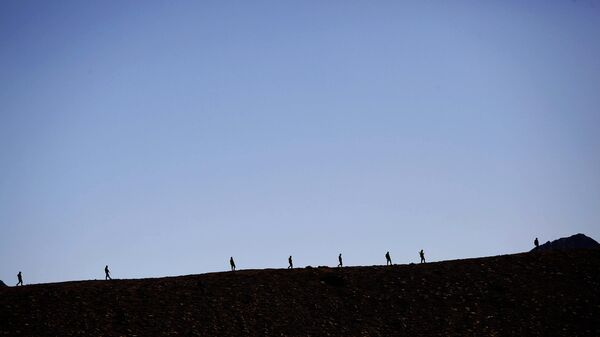 © AP Photo / Anupam Nath
Subscribe
International
India
Africa
New Delhi (Sputnik): The ongoing standoff between India and China erupted over infrastructure construction near the Line of Actual Control (LAC). China has been urging India to be cautious and practice restraint over infrastructure development in the border areas, which are separated by the loosely demarcated LAC.

In an indication of the seriousness of the situation, the Indian Army has decided to deploy more troops in the middle sector of the nearly 4,000-kilometre Line of Actual Control (LAC) that divides India and China. The two countries were expected to reach a border agreement in middle portion of the border after China revived the term “early harvest consultations” on border disputes.

People familiar with the situation in the region said that additional troops were rushed to the border areas of Uttarakhand following reports about the increased presence of troops from the People’s Liberation Army in the Guldong sector.

China Trying to Be Provocative in Ladakh, But India Knows Other Ways, Security Analyst Says
"Deployment ahead of Harsil has been strengthened due to reports of Chinese beefing up their numbers in the opposite sector", a senior defence official was quoted as saying by the news website Indian Express.

In the Ladakh area, where the ongoing standoff first broke out in the last week of April, the Indian Army has increased drone surveillance to keep an eye on the movement of Chinese troops along the loosely demarcated LAC.

The defence official said that reinforcements have already been provided in the critical areas of the Galwan Valley, where China pitched around 100 tents with heavy vehicles and more troops as Beijing claimed that India had trespassed the border and built defence infrastructure. The Indian Foreign Ministry denied the Chinese claim.

Defence sources said that a sixth meeting between sector commanders from both the Indian and Chinese armies also remained inconclusive.