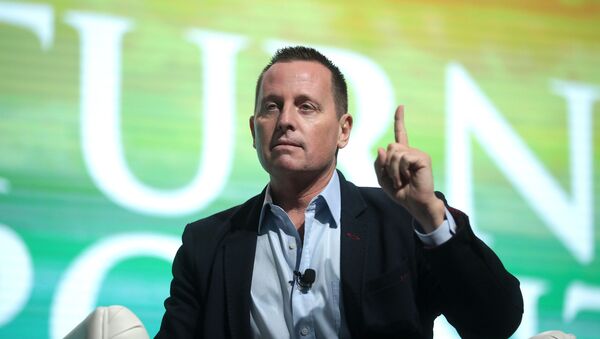 Oleg Burunov
All materialsWrite to the author
Last Saturday, US Ambassador to Berlin Richard Grenell reportedly hit out at German Foreign Minister Heiko Maas over his criticism of US President Donald Trump’s decision to exit the Open Skies Treaty.

German lawmaker Andreas Nick has gone on Twitter to сast doubt on outgoing US Ambassador to Germany Richard Grenell's legacy in terms of Berlin-Washington relations.

Nick, who is also head of the country's delegation to the Parliamentary Assembly of the Council of Europe (PACE), noted that "for a generation, each and every US Ambassador I got to know personally - career diplomat or political appointee alike - used to leave his post as a highly respected figure and trusted friend of Germany".

For a generation, each and every US Ambassador I got to know personally - career dipomat or political appointee alike - used to leave his post as a highly respected figure and trusted friend of Germany. Now someone leaves issuing threats as if he were representing a hostile power

"Now someone leaves issuing threats as if he were representing a hostile power", the German MP added, in an apparent reference to Grenell.

The US ambassador was quick to respond by tweeting that Berlin allegedly "always wanted me to stop asking you publicly to pay your NATO obligations and calling for an end to [the Russian gas pipeline project] Nord Stream 2".

You always wanted me to stop asking you publicly to pay your NATO obligations and calling for an end to Nord Stream 2. But these are US policies. And I work for the American people. https://t.co/AK240eMM3H

Earlier this year, German Chancellor Angela Merkel lauded Nord Stream 2 as a "very important" project that will benefit not only Germany, but many other European countries, calling for its completion regardless of the threat of US sanctions.

The Grenell-Nick war of words occurred after the envoy reportedly lambasted German Foreign Minister Heiko Maas over the latter's critical remarks related to the recent US decision to withdraw from the Open Skies Treaty (OST).

"Instead of complaining about the US reaction, Heiko Maas should have ramped up pressure on Russia in recent years so that it meets its obligations [under OST]", Grenell told the German newspaper Rheinische Post last Saturday, according to the German news network N-TV.

The remarks followed Maas stating that he "very much" regrets the US government's announcement about Washington's pullout from the OST, described by the top German diplomat as "an important part of the European arms control architecture".

"By withdrawing, the United States would significantly reduce the scope of the Open Skies Treaty and weaken the whole regime", Maas pointed out.

Russia, in turn, has repeatedly rejected US accusations of Moscow's non-compliance with OST, warning that the country would not accept any US ultimatums on the issue and that it is determined to engage in dialogue based on equal terms.

As far as Berlin is concerned, US President Donald claimed last year that Germany is not doing enough when it comes to NATO financing, as Berlin plans to spend 1.5% of its GDP on it by 2024, which is lower than the 2% guideline.

"Germany honestly is not paying their fair share. I have a great feeling for Germany, but they're not paying what they should be paying", Trump argued during his talks with NATO Secretary General Jens Stoltenberg at the White House at the time.