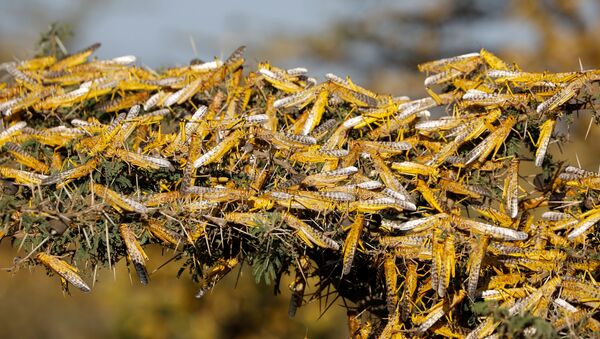 New Delhi (Sputnik): Locusts from Iran and Pakistan have swarmed India and already caused havoc in Rajasthan. The invasion has now moved on to central India and the state of Madhya Pradesh is facing the worst such attack in 27 years.

As India is trying to grapple with rising COVID-19 cases, the economic impact of lockdown, the aftermath of a super cyclone in West Bengal, and a heatwave in northern India, western and central Indian states are facing the worst locust attack in 27 years. The locust swarms have now reached Madhya Pradesh.

Next in the row #2020 is Locust swarms. For d first time it is reported at Panna Tiger Reserve at MP. Quite a worrying future ahead, imagine the plight of the farmers and their hard earned produces. The world knows the catastrophe of these locust swarms. Pic via @PannaTigerResrv pic.twitter.com/5Ud4SMIrHK

Locust swarm attacks a cabbage field in Mhow, Madhya Pradesh. Within minutes they had polished off the entire crop in 4 bigha of land. pic.twitter.com/65h6iTXO7b

​The first wave came in December 2019 and January 2020 but scientists believed that due to the prolonged monsoon and climate change, locust breeding patterns altered, resulting in huge swarms attacking again.

​The locusts have destroyed crops, further bringing misery to farmers, who were under stress due to the lockdown. The locust swarms are expected to move further to the northern Indian state of Uttar Pradesh.

The federal and state agricultural departments have been using chemical sprays to battle the locusts. Drones, satellite-derived tools, special fire-tenders, and sprayers have also been deployed at potential attack locations.