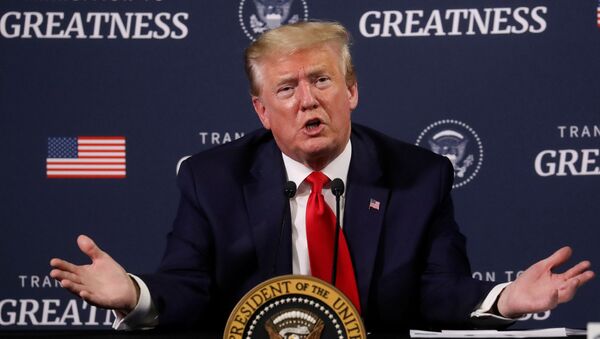 © REUTERS / Leah Millis
Subscribe
International
India
Africa
A study - The Reopen Movement: Motivations and Pathways to Support - disputes claims by liberal critics that the intention of these individuals is reopening the economy no matter the risks to human life, and indeed the group has attracted both independent voters and those who’ve not participated politically in the past.

A report on the "Reopen Movement" - US citizens who oppose, and openly flout, lockdown restrictions in their respective states - has concluded that the amorphous political campaign view themselves as patriots fighting oppressive government authority, which means good news for Donald Trump’s re-election prospects.

“Far from being a threat to America’s health, reopen protests may be its medicine, suggesting American culture doesn’t flourish by looking back but by retesting its convictions. Contrary to the common narrative about their motivations, reopen advocates are not focused primarily on their jobs or the economy. Their rally signs say ‘Let us work,’ but this is focused on an abstract notion rather than a selfish desire”, the report suggests.

Just remember; the whole "reopen" movement was never about actual freedom. It was an astroturf operation to give states with Republican governors cover so they could cut people off of unemployment rolls and keep the GOP writ large from supporting government spending.

​The study seemingly reinforces claims by the protesters themselves that they’re driven by concern that their liberty is being curtailed by state governors, who in turn are exceeding their own powers. What concerns there are about the economy relate to anxieties about the impact that government barring “has on their neighbors and community”, and they feel that it is their “Christian duty” to “encourage others, stand up for the victims of government oppression”, and offer “a wake-up call to empower others”.

The report also finds that the movement differs radically from the Tea Party Movement, which was more economically driven, with many in Reopen not having been part of the Tea Party, but are in fact new to political activism.

Another big win for our Reopen California movement.

​“They find peace of mind through defiance, because it results in felt-freedom, understanding of their own mettle, holding authorities accountable, and standing up for others”, the authors found.

A survey of “strong supporters” of the movement also found overwhelming support for Trump - just over 87 percent voted for Trump in 2016, but now nearly 97 percent would seek to re-elect him. Moreover, the findings indicated a 17.3 percent increase in support for Trump among independents supporting the Reopen Movement - and in all 7.8 percent of the movement's members didn’t vote for anyone in 2016, giving Trump a potentially vital boost in supporters overall.

“The protesters are demonstrating a new selflessness, a sacrifice different from staying at home and closing non-essential businesses. Their selflessness requires moving into untamed territory, which in this case risks very real conflict with authorities. These ‘Untamed’ are resisting out of duty to what they say is unlawful infringement of their rights based on unscientific, flawed premises that result in deeply troubling collateral damage to the American community”, the report concludes.