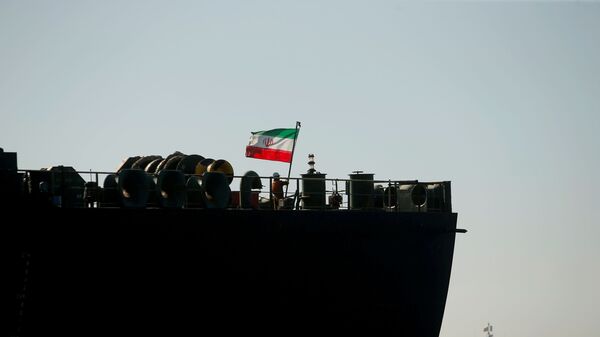 Tim Korso
All materials
The first Iranian tanker carrying gasoline and the components to produce it from oil arrived in the Bolivarian Republic on 24 May, despite the two countries' concerns that it risked being intercepted by the US Navy, which is patrolling the Caribbean.

Venezuela's President Nicolas Maduro has condemned US attempts to prevent Caracas from having trade relations with Iran, arguing that this is an inalienable right of the two states.

"Venezuela and Iran both want peace, and we have the right to trade freely", Maduro stated.

The Venezuelan president went on to thank Iran for its incoming shipments of gasoline, as the first tanker carrying a deficit cargo arrived in Venezuela's port of El Palito amid fuel shortages in the country. Maduro said that Caracas has "good and brave friends" in the world, praising Venezuelans and Iranians as "revolutionary peoples, who will never kneel down before the North American empire" in an apparent reference to the US and its sanctions policies against the two countries.

The US sanctions have crippled the Venezuelan oil industry, depriving it of the ability to buy sophisticated equipment abroad that is needed to refine the ultra-heavy blend of oil extracted in the country. A lack of maintenance and upgrades at refineries has limited Venezuela's capacity to produce its own gasoline, causing country-wide shortages.

However, Caracas recently saw a chance to improve the situation, as Iran sent five of its oil tankers to Venezuela carrying, according to some estimates, up to 1.53 million barrels of gasoline and alkylate, a component needed to produce high-grade fuel. One of them reached Venezuela's shores on 24 May, while another, called Forest, is expected to arrive later on 25 May.

The arrival of the remaining tankers remains in question, however, as some media reports have suggested that the US could use its Navy vessels in the Caribbean to stop the shipment. While these reports have not been officially confirmed, Iran's President Hassan Rouhani has warned Washington against causing trouble for its tankers, vowing that Tehran would retaliate.

The US has in the past alleged that Iran is helping its Latin American partner to restore the oil refining industry, while being paid in gold from Venezuela's reserves for its services. Iran's Foreign Ministry has called the allegations "baseless" and condemned the US attempts to destroy the Venezuelan economy and topple its government.