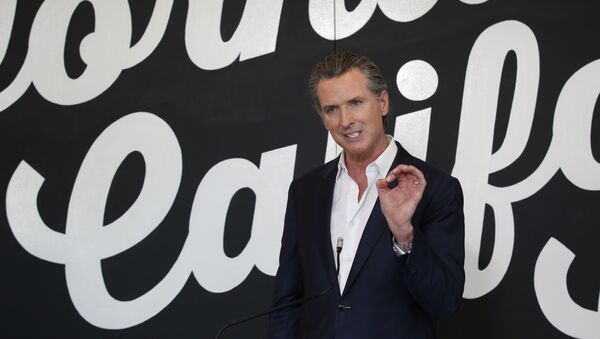 Lilia Dergacheva
All materialsWrite to the author
California Governor Gavin Newsom issued an executive order on 8 May to send in ballots by mail to all registered voters ahead of the November presidential polls, so as to diminish the scale of in-person voting as the COVID crisis rages on.

A number of Republican groups are suing California Governor Gavin Newsom, accusing him of attempting to rewrite the long-standing election system citing his recent executive order to mail every registered voter in the state a ballot ahead of the November presidential vote.

"In a direct usurpation of the legislature's authority, Governor Newsom issued an executive order purporting to rewrite the entire election code for the November 2020 election cycle," reads a CBS-cited complaint, going on to dub the move a "brazen power grab” that is authorised by neither state law, nor the election procedure-centered clauses of the US Constitution.

Among the plaintiffs in the lawsuit are the Republican National Party, the National Republican Congressional Committee, and the California Republican Party, who affirm that the Constitution reserves for "state legislatures the power to set the time, place, and manner of holding elections for Congress and the President". Meanwhile, Newsom as an executive officer maintains "no authority to unilaterally exercise that power", the document reads, with the plaintiffs arguing such an order provides conditions conducive for fraud.

The GOP thereby sounded an alarm over ballot papers potentially ending up in the mail boxes of inactive voters, and in the wrong hands by mistake, or being intercepted by culprits.

Commenting on the legal challenge to Newsom’s order from early May, RNC Chairwoman Ronna McDaniel accused the Democratic Party of trying to “redesign” the entire election system “for political gain” using the raging pandemic as a pretext. The Democrats hit back, insisting that mail-in voting is a necessary evil, aimed at containing the virus and preventing its further spread.

Donald Trump has repeatedly taken on Democrat-run states, such as California, Michigan, and Nevada which voiced an intention to double down on voting by mail while cutting in-person polls.

“The United States cannot have all Mail In Ballots. It will be the greatest Rigged Election in history. People grab them from mailboxes, print thousands of forgeries and 'force' people to sign", the president tweeted on Saturday. Later on, the president fumed, summing up his take:

“The Democrats are trying to Rig the 2020 Election, plain and simple!”