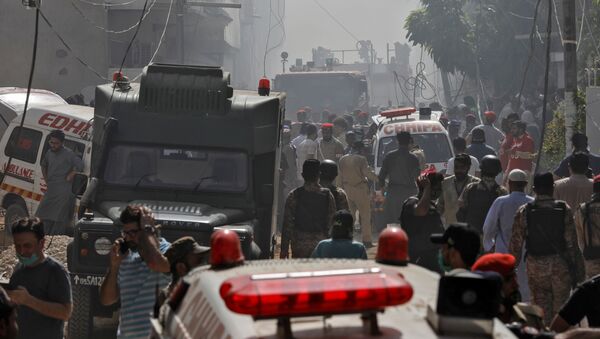 © REUTERS / Akhtar Soomro
Subscribe
International
India
Africa
PARIS (Sputnik) - France's Bureau of Inquiry and Analysis for Civil Aviation Safety sent an investigative team to Pakistan on Monday to probe the crash of an Airbus jetliner with 99 people on board.

"Investigators with BEA_Aero, technical advisors from Airbus & SafranEngines are on their way to Pakistan and will be on site on 26 May", the organization tweeted.

The Airbus A320 crashed into a crowded neighborhood near the airport in the Pakistani city of Karachi on Friday. The Sindh provincial health ministry has confirmed the death of all but two people aboard the plane. A dozen people on the ground were hurt.

Following the crash of the aircraft, the Pakistani government's aviation division set up a four-member investigative team to probe the incident.

Airbus said the plane first flew in 2004 and joined the air fleet of the Pakistan International Airlines in 2014, logging around 47,100 flight hours. It was powered by CFM56-5B4/P engines, produced by France's Safran Aircraft Engines and US's General Electric.