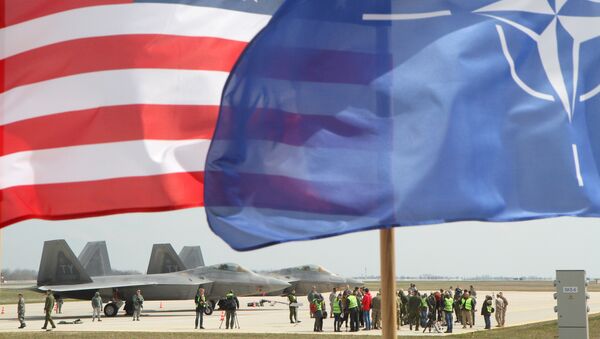 MOSCOW (Sputnik) - Washington’s decision to withdraw from the Open Skies Treaty is unlikely to be followed by other NATO allies, who view the agreement as a crucial tool in ensuring arms control, and could put the future of the New Strategic Arms Reduction Treaty (START) into doubt, experts say.

The Open Skies Treaty was signed in 1992 and entered into force 10 years later. The agreement allows all 34 countries that have ratified the treaty to conduct unarmed surveillance flights over one another.

On Thursday, Trump stated that the US will pull out from the treaty due to alleged violations of the agreement by Russia. One day later, Russian Deputy Foreign Minister Sergei Ryabkov said that Moscow had received official notice from Washington of the decision.

World
US Officially Notifies Russia of Its Withdrawal From Open Skies Treaty
Russia has denied the US accusations and said it intended to further fully comply with all the provisions of the Open Skies Treaty as long as it is in force, and expected other signatories of the deal to respect it as well.

Trump's decision has also been slammed at home. It was criticised by Congressman Alcee Hastings, the chairman of the US government's Helsinki Commission, and lawmakers in Washington have even introduced a bill that would prevent any president from withdrawing the US from international treaties without congressional approval.

As a result of the Trump administration’s decision, the US is set to leave the agreement within six months.

Trump’s decision to tear up one of the most important treaties for guaranteeing arms control will come as a surprise to many, Professor Ramesh Thakur, director of the Centre for Nuclear Non-Proliferation and Disarmament in the Crawford School at the Australian National University and co-convenor of the Asia-Pacific Leadership Network for Nuclear Non-Proliferation and Disarmament, told Sputnik.

"As far as I can tell, it was totally unexpected. In retrospect, however, perhaps it should not have been, for the Trump administration has been systematically tearing down the architecture of nuclear arms control, edifice by edifice," Thakur said.

According to the academic, the majority of NATO allies consider the Open Skies Treaty to be a highly effective mechanism that has led to the building of confidence between countries.

"I think it adds to a growing list of irritants in the trans-Atlantic community. Most NATO allies believe the Open Skies Treaty, which authorized almost 1,500 missions, has been a critical confidence-building agreement that helped to improve security on the European continent with every flight. The irony is that growing geopolitical tensions actually make it more important, not less, for both sides to be able to monitor each other's activities through the mechanisms provided by the Open Skies Treaty in order to reassure themselves about the other side's activities and intentions," Thakur said.

"The US withdrawal and the collapse of this treaty and arrangements it underpinned will undermine mutual trust even more, and worst-case assumptions will drive both sides' decisions. This is not helpful," the academic said.

Thakur’s sentiments were largely shared by Miles Pomper, a senior fellow at the Washington DC office of the Middlebury Institute's James Martin Center for Nonproliferation Studies, who told Sputnik that the deal was vital in preventing misunderstandings between different countries’ armed forces.

"When fully complied with, the Open Skies Treaty is a valuable tool for enhancing global stability and security, particularly for European NATO allies near Russia, minimizing misunderstandings and worst-case scenarios on deployments," Pomper remarked.

The James Martin Center researcher added that Washington’s decision creates a wealth of uncertainty, and many nations will be looking on intently to see what comes next.

"So the real effect for security will depend on what comes next. Do European states and Russia remain in the treaty? Should they do so many of the security and stability benefits can be preserved," Pomper remarked.

M. V. Ramana, the Simons Chair in Disarmament, Global and Human Security at the School of Public Policy and Global Affairs and the director of the Liu Institute for Global Issues at the University of British Columbia, also emphasized Open Skies’ role in ensuring global arms control.

"I think the US withdrawal from the Open Skies Treaty is yet another nail in the coffin of arms control and international cooperation as a way to deal with military and nuclear risks," Ramana told Sputnik.

It remains to be seen if any other countries will follow Trump’s lead and exit from the agreement. Despite the close ties between Washington and London, a spokesperson from the UK embassy in Moscow on Friday stated that the government does not intend on withdrawing from the agreement.

Leading German officials such as Foreign Minister Heiko Maas and Defense Minister Annegret Kramp-Karrenbauer have also given their support to the Open Skies Treaty in the wake of Trump's decision.

According to Pomper, NATO allies are likely to want to keep the treaty alive, although their decision may be contingent on Moscow’s next steps.

"I would think they [NATO member states] would want to stay in, but of course it will depend on Russia's reaction. Does it withdraw or impose conditions for doing so?" Pomper told Sputnik.

This opinion was shared by Joshua Pollack, a senior research associate at the Middlebury Institute of International Studies at Monterey, California, who stated that the European NATO member states have several reasons for upholding the treaty.

"I doubt that European allies or partners of the United States will be inclined to exit the Open Skies Treaty. As long as Russia participates fully, the Europeans will have reasons to continue doing so as well. If Russia should also withdraw or should become more difficult in its approach to implementation, then the treaty may be reduced to a dead letter," Pollack said.

Trump’s decision to pull the plug on the Open Skies Treaty bears resemblance to his decision to withdraw from the Intermediate-Range Nuclear Forces Treaty, the Middlebury Institute scholar said. The president also blamed Russia’s alleged non-compliance with the agreement.

US Withdrawal From Open Skies Treaty 'Distasteful, Ill-Advised' - Helsinki Commission Head
"Still, the treaty clearly retains some value, especially to European states. This withdrawal decision resembles the earlier US withdrawal from the INF Treaty, insofar as it is as much a slap at America's European allies as anything else. That should no longer be a surprise. This president has often shown that he is more interested in having tributary states than genuine, two-sided alliance relationships," Pollack remarked.

According to Dr. Nikolai Sokov, a senior fellow at the Vienna Center for Disarmament and Nonproliferation, the Open Skies Treaty is likely to remain in force until at least November.

"It is likely that for some time Open Skies will remain in force. All US allies value it and will try to keep it in force. At the very least, everyone will wait for the next US election in November," Sokov told Sputnik.

The Vienna-based researcher added that the treaty is mutually beneficial for all parties, and Trump’s decision to leave the agreement was not based on any alleged violations.

Trump has stated that he is willing to come to the negotiating table to formulate a new Open Skies Treaty, but University of British Columbia scholar M. V. Ramana said that any new deal will be unlikely.

"I don’t think the Trump administration is serious about coming up with a new deal, but even if it does, the question is whether anyone should trust the United States at this point, given that the Trump administration has pulled out of three treaties, the other two being the JCPOA [Joint Comprehensive Plan of Action] and the Intermediate-Range Nuclear Forces Treaty," Ramana said.

US Lawmakers Introduce Bill to Block Trump From Leaving Treaties After Open Skies Pullout
According to Dr. Thomas E. Shea, an adjunct senior fellow at the Federation of American Scientists, the continued tearing up of long-standing international treaties by the Trump administration is a worrying prospect for the rest of the world.

"On a larger topic, I am increasingly troubled by the willingness of some states to ignore or cheat on treaties that later governments find as irrelevant or unimportant or a nuisance … There is no other mechanism existing through which states can manage their differences or seek widely held goals," Shea told Sputnik.

Washington’s willingness to withdraw from agreements that it does not find convenient sends a wrong message to other countries, such as North Korea, which may doubt the credibility of any future treaties, Shea added.

"The stabilizing influence of treaties remaining in force comes into question, and the ability to motivate states and the international community to believe that a new treaty might have value would certainly be more difficult to realize. What sort of treaty could provide a durable guarantee to the [North Korea] that its security would be protected if it would scrap its nuclear arsenal?" the academic stated.

According to the Vienna-based scholar, Sokov, Trump may also try to prevent extending the Russian-US New START treaty, which is set to expire in 2021.

"The same fate awaits New START. The administration has indicated that it considers a six-month extension so that a new trilateral treaty including China can be negotiated. Clearly, it is next to impossible to negotiate such a treaty in such a short time. A six-month extension is a pretense, nothing more. And we have heard nothing about possible conditions for that extension," Sokov remarked.

"I think it [New START Treaty] may depend on the P5 summit in New York scheduled for September to discuss this issue, and US politics. Should Trump decide it is in his political interest, he may seek at least a short-term extension, particularly if he gets some kind of agreement that China will agree to talks in some fashion or he gets concessions from Russia on other US concerns," Pomper remarked.

However, Joshua Pollack suggested that the president may be willing to let the New START treaty expire in February 2021 without a new agreement in place.

"The Trump administration's preferred strategy has been to erect high hurdles against the extension of New START, in the apparent hope that the treaty will simply expire on schedule," Pollack stated.

EU Foreign Policy Chief Borrell Urges US to Reconsider Decision to Leave Open Skies Treaty
This opinion was shared by Professor Ramesh Thakur, who also cast doubts on the likelihood of New START being extended.

"What remains, apart from New START? At this stage, the chances are higher that New START also will be allowed to lapse rather than renewed," Thakur stated.

This is particularly likely given Washington’s desire to bring Beijing into any future nuclear arms control agreement, which will lengthen negotiations, the Centre for Nuclear Non-Proliferation and Disarmament director stated.

"I believe a matter of increasing criticality will be how to trilateralize the arms control architecture, starting with negotiations and leading to new agreements between the US, Russia, and China. This will prove challenging," Thakur remarked.

With the list of global binding treaties on arms control growing smaller and smaller, many countries are feeling uneasy and waiting anxiously for the next move to be made.