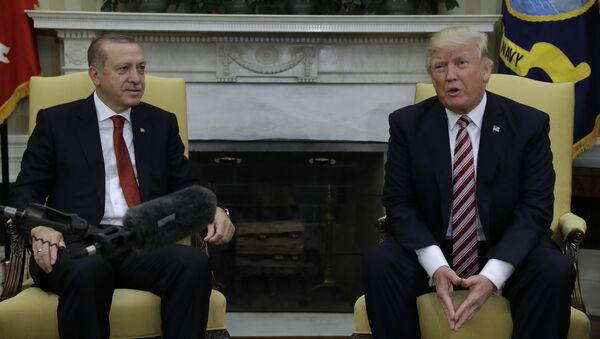 The leaders agreed on maintaining "close political and military cooperation" to ensure peace and stability in the region, the office said, adding that they also reaffirmed "their solidarity in the fight against COVID-19".

Agreeing on maintaining close political and military cooperation to ensure peace and stability in our region, the two leaders reaffirmed their solidarity in the fight against COVID-19.

​The statement comes after US Secretary of State Michael Pompeo and Libyan Prime Minister Fayez al-Sarraj in a phone call discussed the necessity for a ceasefire and returning to political talks.

In Libya, the confrontation between Sarraj's Government of National Accord (GNA) and the rival Libyan National Army (LNA) has practically split the oil-rich country into a duopoly since 2011. Over the past few months, the situation has escalated as the LNA advanced on GNA-held Tripoli.

World
Moscow Supports Any Initiative Aimed at Ending Bloodshed in Libya - Foreign Ministry Source
In January, a conference on Libya was held in Berlin where participating countries committed to supporting the war-torn country through the restoration of peace. In particular, the participants agreed to halt arms supplies to Libya as a measure of non-interference in the Libyan civil conflict between two rival administrations. Among these countries were Algeria, China, Egypt, France, Germany, Italy, Russia, Turkey, the Republic of the Congo, United Arab Emirates, the United Kingdom and the United States.

The US-led coalition of more than 60 nations has been carrying out airstrikes and other operations against terrorists in Syria since September 2014. However, the coalition has acted in Syria without the approval of the Syrian government or the UN Security Council.