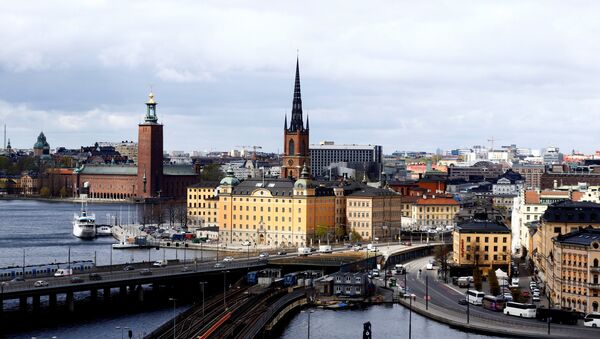 © REUTERS / Ints Kalnins
Subscribe
International
India
Africa
The rookie sex workers, revealed during a recent police operation, claim to have lost their normal income due to the coronavirus pandemic.

Swedish police and social services have sounded the alarm over a new phenomenon: young people selling themselves to make ends meet after admittedly having lost their jobs due to the Covid-19 epidemic.

“Their parents also spoke about this. We are talking low-paying jobs, such as fast-food restaurants,” Malin Andersson, Secretary of Social Affairs for the Stockholm City Youth Rapid Response Team, told the newspaper Dagens Nyheter.

During the recent Operation Cod that targeted sex buyers in Stockholm, the police identified at least five people below the age of 18 who provided sexual services for money. Their sex ads said “Lost my extra job”, the newspaper Svenska Dagbladet reported.

“We clearly see increased activity among young people,” Detective Inspector Simon Häggström told Svenska Dagbladet. “They themselves say this is due to corona, that they have no job, and that they just sit at home. It is definitely a new group of young people making their debut now. It's alarming,” Häggström added.

Andersson said that some young people have been feeling unwell psychologically, and this trend only worsened while the schools were closed.

“They feel isolated. If a person falls into this sphere, usually there are some reasons. Everyone there feels bad, due to different circumstances. We can talk about previous traumas due to which one now feels completely alone, estranged from others,” Malin Andersson explained.

According to the social services, most young people started with sites for “sugar dating”, where wealthy adults seek out younger partners for money.

“This implies a very big risk. People who are interested in children have already crossed the threshold, they don’t care what the child thinks. Also, they are very good at persuading,” Andersson said.

When the police and social services identify sex workers who are younger than 18, they are taken home to their parents and offered help and support.

“Now we see more active male users on sugar dating sites, and young people are more likely to post ads offering sexual services. All this is very serious, as we know: very often this kind of arrangement is a direct gateway to prostitution,” Stockholm City social affairs councillor Jan Jönsson said, pledging to address the matter.

Swedish Government Wants to Throw Sex Buyers Into Jail as 'Slave Traders', 'Rapists'
Sweden's present-day legislation on prostitution make it illegal to buy sex, but not to sell it. Pimping and operating brothers is also illegal. It was Sweden that pioneered the criminalisation of the purchase, but not the selling of sex back in 1999. Since then the Nordic model has spread to other nations, including Canada and Ireland.

With 32,172 confirmed Covid-19 cases and close to 3,900 deaths, Sweden is the worst-hit Scandinavian nation.

Despite its no-lockdown strategy, Sweden's economy has taken a deep hit as consumption plummeted by over 24 percent since March.