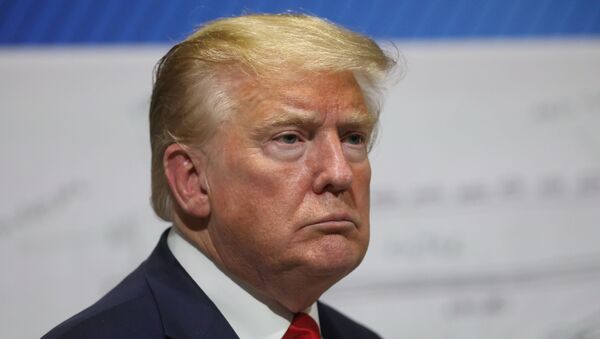 US President Donald Trump launched another attack on former media ally Fox News on Friday, criticising the news company's polling team, following a survey which shows the incumbent president losing the 2020 election to Joe Biden by an 8 point gap.

Trump attacked the network in a tweet, criticizing the media outlet by invoking the name of deceased CEO Roger Ailes who, the president implies, is sadly "looking down" on his "once beautiful creation".

Why doesn’t @FoxNews put up the CNBC POLL or the (believe it or not!) @CNN Poll? Hope Roger A is looking down and watching what has happened to this once beautiful creation!

​In another tweet, the president demanded that Fox News fire what he characterized as the network's "fake pollster", declaring that he has never had a good Fox poll. Trump included previous polls from the 2016 election which showed his then-Democratic rival Hillary Clinton holding a 10-point lead before losing the November 2016 election.

.@FoxNews should fire their Fake Pollster. Never had a good Fox Poll! https://t.co/joHfkQwd9L

​The survey, released Friday, showed former Vice President Joe Biden with an 8 percent lead over Trump. Those polled gave a 48 percent intention to vote for Biden, 40 percent for Trump with 11 percent undecided.

Fox News poll has Biden up by eight points. The poll had them tied a month ago. pic.twitter.com/UQytlg9pNX

​The new poll suggested a surge of support for the former vice president, who last month was said to be tied with Trump at 42 percent. While the president does not currently lead in any major national poll, CNBC and CNN give Biden a much thinner lead of 3 and 5 percentage points, respectively.

Fox News poll has Biden up by eight points. The poll had them tied a month ago. pic.twitter.com/UQytlg9pNX

​The Fox poll suggests that Trump's favorability rating is dropping, with 43 percent of voters having a positive opinion of the president, compared to 55 percent who hold a negative view.

Biden's favorability has maintained a stable rating with 48 percent favorability for the presumptive Democratic nominee and a 46 percent disapproving.

The poll comes as Trump's approval rating has dropped amid his handling of the coronavirus, which surveys demonstrate is looked at poorly by most Americans.

An ABC poll on Friday suggested that nearly 60 percent of US adults disapprove of the president's response to the pandemic.

Pres. Trump's disapproval rating among Americans reaches highest level since the first ABC News/Ipsos poll on the coronavirus (57%), with only 42% approving, according to new @ABC News/Ipsos poll. https://t.co/ho8SmlkU2X pic.twitter.com/ZRIDi9TPSV

Biden has seen a striking comeback in public opinion during the Democratic primary contest for the nomination, after a collapse in support during the first state elections to then-frontrunner Vermont Senator Bernie Sanders.

Despite losing the popular vote by over 3 million ballots, Trump would go on to win the electoral college and be elected the 46th president of the United States.