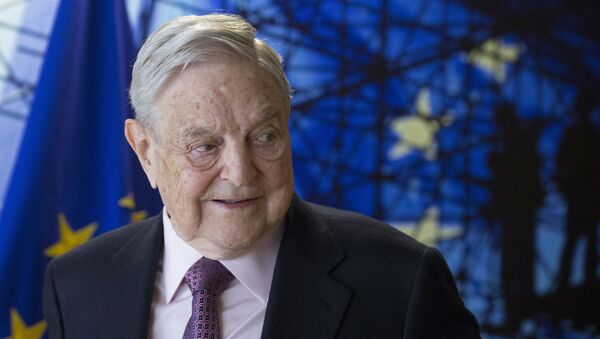 © AP Photo / Olivier Hoslet, Pool Photo
Subscribe
The financier’s comments come just a week after he voiced fears that the German Constitutional Court’s recent ruling on the European Central Bank’s haphazard purchasing of government debt may spell “the end of the EU as we know it.”

Billionaire investor George Soros has reiterated his recent warning about the European Union’s possible fate, warning that the bloc could die from the economic calamity brought on by the coronavirus crisis unless it began issuing bonds to assist its weakest members.

“If the EU is unable to consider it now, it may not be able to survive the challenges it currently confronts,” Soros said in an email to reporters, his remarks cited by Reuters. “This is not a theoretical possibility; it may be the tragic reality,” he stressed.

According to the investor, issuing bonds to help countries would require Brussels to maintain a AAA credit rating, meaning the need to authorize new taxes to cover the bonds’ cost. “The taxes only have to be authorized; they don’t need to be implemented,” he insisted.

Soros also expanded on a subject he discussed at length last week – the German Constitutional Court’s ruling that the European Central Bank had overstepped its mandate with the purchase of government debt under its quantitative easing (i.e. cash printing) programme. The German court gave the bank a three-month ultimatum to justify the proportionality of the bond purchases, and warned that the Bundesbank would drop out of the programme if a solution was not found. In an unprecedented response, the European Commission threatened to sue Berlin.

In his remarks Friday, Soros suggested that “the relaxation of state aid rules, which favour Germany, has been particularly unfair to Italy, which was already the sick man of Europe and then the hardest hit by COVID-19.”

According to Soros, if Italy drops out of the EU, it might be the beginning of the end for the bloc. “What would be left of Europe without Italy?” he asked.

Soros isn’t alone in his concerns about the EU’s weak performance in the face of the coronavirus crisis. Last week, Bloomberg reported that Brussels’ failure to “mount a joint fiscal defence” against the coronavirus and the “lack of a cohesive fiscal policy” have already made the euro one of the weakest major Western currencies, sparking fresh fears about the bloc’s future.

Soros, the Hungarian-American hedge fund manager-turned activist, has been a vocal proponent of the European Union project since the 1990s. In the UK, he’s best known for sparking the 1992 run on the pound, which earned him his first billion dollar earning, but cost the British economy billions in losses. In 2002, he was convicted of insider trading in France. Elsewhere, he’s faced criticism for spending billions of dollars spreading his vision of a global, liberal, market-driven world order. He began his political activities in Eastern Europe in Eastern Europe and the former Soviet Union in the late 1980s and early 1990s. Since then, his Open Societies Foundations have spread to over 60 countries, including not just developing nations, but the US and Western Europe as well. Russia kicked Open Society Foundations out of the country in 2015, listing their activities as a threat to national security.