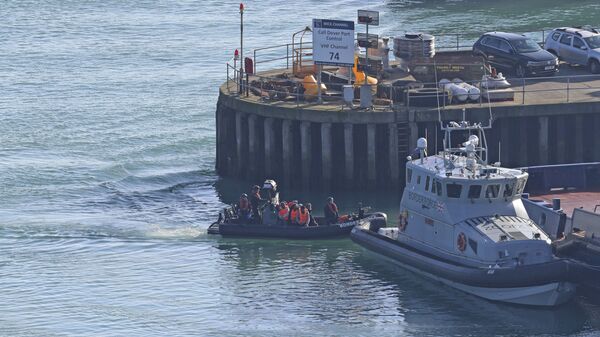 The United Kingdom claims that it is seeing record levels of illegal migrants crossing the English Channel from France, many of whom are children traveling alone. Local authorities suggest that they are having difficulty taking care of the surging numbers of people, and have appealed to government for support.

Global border security consultant and a former director general of the UK Border Force, Tony Smith, on Friday warned that an ongoing migrant crisis is becoming a "major threat" at the UK border.

Smith, 67, stated that the current arrangement of bringing people intercepted in the English Channel to the UK would not end what he characterized as a crisis, and criticised London for not doing enough to prevent illegal immigrants from entering the country by boat.

"This was declared a critical incident by the Home Secretary last year", Smith said.

"In my experience," he stated, "critical incidents are declared in order to put out the fire [...] with a task force and that when the fire's put out we return to business as normal".

Smith asserted that the crisis was "too enduring" to be a critical incident and that illegal migration is "becoming a major threat" at the UK border.

"This is all driven by money and smugglers. You need to send a very, very clear message that that's not going to work", he said.

On the same day, a former Border Force chief, Henry Bolton, called for an "Australian-style Border Patrol" which would have powers of arrest and be trained to remove illegal migrants from their boats before returning them to France.

Earlier I posted the locations of the Border Force Patrol Vessel and the French cutter ‘Fourmentin’ in U.K. waters prior to the former bringing migrants into Dover. Here is footage of that rendezvous in the Channel. For reference, I’ve reposted previous photos below. pic.twitter.com/lrRwzdbHuh

​While Smith argues for a more heavy-handed approach to deter illegal migrants, some local authorities suggest that social services could become "overwhelmed" by an increasing number of solo child migrants arriving into the country illegally.

Gough said that the number of unaccompanied asylum-seeking children (UASC) had reached levels not experienced since the 2015 European migrant crisis.

UASC arrivals fall under the care of the country council, and Gough, who heads the Tory-led body, warned that it soon would not be able to meet the legal requirement to "safely care for new arrivals".

Gough suggested that the transfer system be overhauled and replaced with more funding from the Home Office, spreading the responsibility onto other councils.

"Whether children are dispersed around the country using a revamped national transfer scheme, or stay in Kent, they will need properly funded services in order to thrive and integrate", she said.

Relocations must be conducted in a "timely manner", if they take place at all, she added.

"Before the scheme broke down in 2018 children were often waiting months to be transferred, meaning that they made friends and built networks and relationships before being uprooted again".

473 children aged under 18 are currently in the council's care. 928 of the arrivals have turned 18 since reaching the UK, but remain under the protection of the local authority.

The Immigration Services Union is concerned that children arriving by boat could be trafficked into slavery, as total arrivals from across the English Channel in small boats has hit record levels, with over 600 migrants arriving in May.

This comes as the Home Office launches an initiative to remove illegal migrants in the UK who have crossed the English Channel. Operation Sillath is one such response to the rising numbers of people said to be crossing from France.

Under existing EU legislation known as the Dublin Convention, an EU country can return an asylum seeker to another member state if they were identified by fingerprint, have claimed asylum, or spent a period of time in the first country.