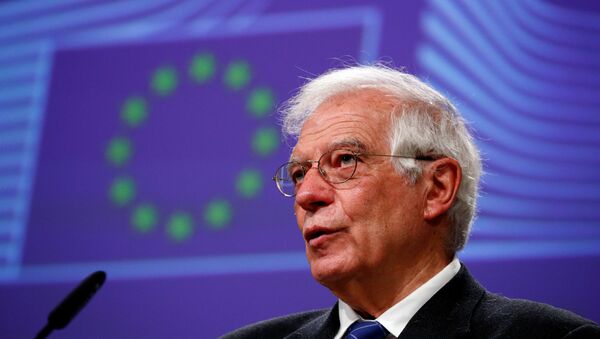 MOSCOW (Sputnik) - EU foreign policy chief Josep Borrell has urged the Trump administration to reconsider its decision to withdraw the US from the Open Skies Treaty, a key arms control agreement.

"I regret the announcement by the United States to withdraw from the Open Skies Treaty. The Treaty on Open Skies is a key element of our arms-control architecture and serves as a vital confidence and security-building measure," Borrell said in a statement.

"While continuing to urge Russia to return immediately to the full implementation of the Treaty, I call upon the United States to reconsider their decision," he said.

The EU official noted that the Open Skies agreement has, since entering into force in 2002, facilitated over 1,500 "reconnaissance missions over the territories of all the signatory states", providing "transparency and predictability".

"The European Union will be examining the implications this decision may have for its own security," Borrell observed.

On Friday, Russian Deputy Foreign Minister Sergey Ryabkov stated that the US had officially notified Moscow of its intent to withdraw from the Open Skies Treaty. The official said that Washington quitting the agreement on observation flights will contribute to the break-up of the security system.

Following Thursday's initial confirmation by US President Donald Trump of plans to withdraw from the treaty, German Foreign Minister Heiko Maas expressed deep regret over the decision by the Trump administration to withdraw the US from the agreement.

US Secretary of State Mike Pompeo added that the US would leave the Open Skies Treaty within six months from Friday, but would reconsider the withdrawal if "Russia returns to full compliance" with the accord, while claiming that Russia had "weaponized the treaty by making it into a tool of intimidation and threat".

Russian Deputy Foreign Minister Alexander Grushko earlier noted that there had been no breaches of the treaty by Russia, and added that Moscow intended to fully comply with all rights and obligations under the Open Skies Treaty as long as the agreement remains valid.

The Open Skies Treaty, signed in 1992 and ratified in 2002, establishes a program of unarmed aerial surveillance flights over the entire territory of those nations who are members of the accord.