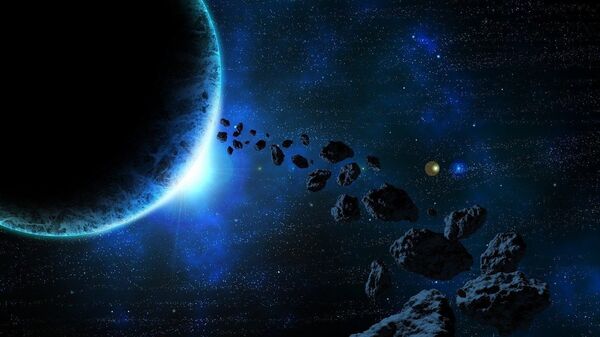 Although quite rare, it is not at all unusual for astronomers to come across so-called “active” asteroids, that share some characteristics with comets due to their outgassing tails. However, a newly-discovered space object may complicate this definition even more.

The Universe is full of surprises, astronomers say. Now, they have confirmed the existence of a “first-of-its-kind” asteroid that shares an orbit with Jupiter, while tossing out gas like a comet, the University of Hawaii’s Asteroid Terrestrial-impact Last Alert System (ATLAS) project, funded by NASA, has revealed.

“Even though the ATLAS system is designed to search for dangerous asteroids, ATLAS sees other rare phenomena in our solar system and beyond while scanning the sky,” said Larry Denneau, the project's principal investigator. “It’s a real bonus for ATLAS to make these kinds of discoveries.”

The object, dubbed 2019 LD2, is a so-called “active” asteroid and has a comet-like tail. But what is unique about this space rock is that it also belongs to a group of Jupiter Trojans, asteroids that share their orbit with Jupiter. 2019 LD2 is believed to be the first-ever object detected to fly near the Solar System’s largest planet, while also behaving like a comet.

The rock was firstly detected last June when scientists from various universities throughout the world rushed to study ATLAS images of the unusual object, noting the “cometary” nature of the asteroid’s body and observing its behaviour more closely. It was only after its reappearance in the sky this April, as it moved behind the Sun and was not visible from the Earth for some time, when astronomers were able to confirm that it was indeed acting like a comet, despite being an asteroid.

Science & Tech
'Fast & Furious' Aten-Class Asteroid Will Closely Approach Earth This June
The finding puzzled researchers as they used to believe that any ice vaporising from the Trojan asteroids’ surface, thus creating a comet-like tail, should have disappeared a long time ago, as these space rocks were first captured and locked into their orbits billions of years ago. Thus, the nature of 2019 LD2 remains obscure, as the object is either a recent Jovian acquisition or an old asteroid that has suffered some impact which provoked a release of ice buried under its surface.

“We have believed for decades that Trojan asteroids should have large amounts of ice beneath their surfaces, but never had any evidence until now. ATLAS has shown that the predictions of their icy nature may well be correct,” explained Alan Fitzsimmons, the project’s collaborator from Queen’s University Belfast.

There are hundreds of thousands of Trojan asteroids in Jupiter’s orbit, which are mainly divided into two categories - orbiting in front of the planet and behind it, after being swept up by the giant’s strong gravity in the early stages of the formation of our Solar System.