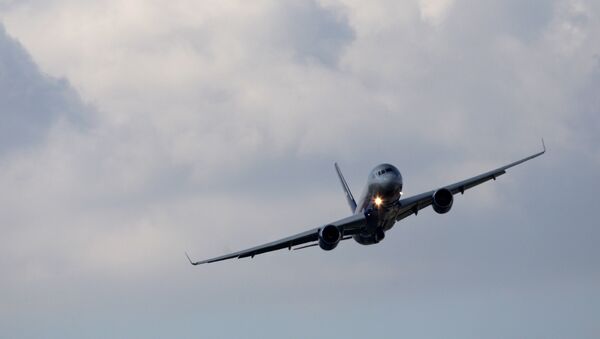 CC BY-SA 3.0 / Dmitry Zherdin / Russian Air Force Tupolev Tu-214ON which will be operated under the Open Skies treaty
Subscribe
International
India
Africa
Earlier, US President Donald Trump confirmed that the United States would exit the Open Skies treaty after accusing Russia of violating same, while suggesting that there was a possibility that the agreement could be renewed, but with new conditions.

German Foreign Minister Heiko Maas expressed deep regret over the decision by the Trump administration to withdraw the US from the Open Skies Treaty, a move announced by the US president on Thursday.

"I very much regret the announcement by the US government that it intends to withdraw from the Open Skies Treaty. The treaty is an important part of the European arms control architecture. By withdrawing, the United States would significantly reduce the scope of the Open Skies Treaty and weaken the whole regime.", Maas said in a statement.

According to the Berlin Foreign Ministry press release, Germany will try to convince the US government to reconsider leaving the treaty.

"The US government's decision will take effect after six months. During this time, we will work intensively with our like-minded partners to make the US government rethink their decision", the statement said.

Maas also committed to continuing to "implement the contract" and doing everything to preserve it, calling on Russia to "return to the full implementation of the treaty".

Amid the announcement, reports emerged that NATO ambassadors are to hold urgent meeting on the US decision to exit the treaty.

Having denied the accusations of violating the Open Skies Treaty, Russia stressed that the US withdrawal from the treaty will undermine the fundamental agreement that strengthens security in Europe, noting that Trump's declaration "goes with the general policy of the current [US] administration [which aims to] derail all agreements on arms control".

The Open Skies Treaty was signed in 1992, entering in force in 2002 and enabling 34 contracting states to observe each other through their territories.