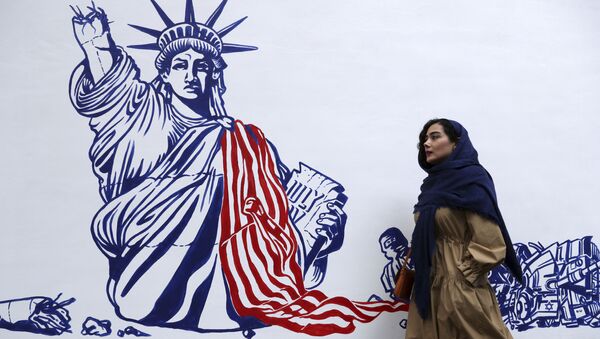 © Vahid Salemi
Subscribe
The United States has been relentlessly trying to ratchet up pressure on Tehran and force it to abandon its missile programme and agree to tougher nuclear commitments. A fresh round of sanctions targets Iran's penitentiary system and several officials, including the country's interior minister.

Iran has downplayed new US sanctions that target the country's authorities as "fruitless" amid historically high tensions between Tehran and Washington.

"Washington's fruitless and repetitive sanctions against Iranian officials is a sign of the weakness, despair and confusion of the US administration," Iran's Foreign Ministry spokesman Abbas Mousavi said on Thursday, as quoted by state TV.

He added that the inclusion of Iranian officials in the US sanctions’ list underscores the "total inefficiency" of previous sanctions.

The United States on Wednesday introduced sanctions against Iran's prison system and nine officials, including the interior minister and chief of police, whom it accused of human rights violations.

Earlier this week, the US sanctioned a Chinese logistics company for providing general sales agent services services to the blacklisted Iranian airline Mahan Air. On 1 May, the US Treasury Department also froze any US-held assets belonging to Amir Dianat, an Iranian-Iraqi businessman accused of supporting efforts by Iran’s elite Quds Force to smuggle weapons abroad. His mining business in Oman was also sanctioned on allegations of acting as a front company for the Quds Force.

Relations between Washington and Tehran have effectively deteriorated to a state of cold war over the past two years since Donald Trump quit the Obama-era nuclear deal, which curbed Iran's nuclear programme in exchange for the lifting of economic sanctions.

Trump reintroduced the sanctions after his closest Middle East ally, Israel's Benjamin Netanyahu, accused Iran of cheating on the agreement despite international inspectors finding no evidence of violations. The US has blacklisted Iranian military and is currently seeking to extend the arms embargo which is supposed to expire this October.

Iran in response has rolled back its nuclear commitments but indicated that it would return to compliance with the deal as soon as the US stops the pressure.

000000
Popular comments
Weak US writhing in its death throes lashes out uselessly and pathetically. I will be glad to witness its end.
coronahoax
21 May 2020, 10:57 GMT5
000000
coronahoax, after releasing its corona bomb which has done a full u-turn on them. Then again nukes are much more visible.