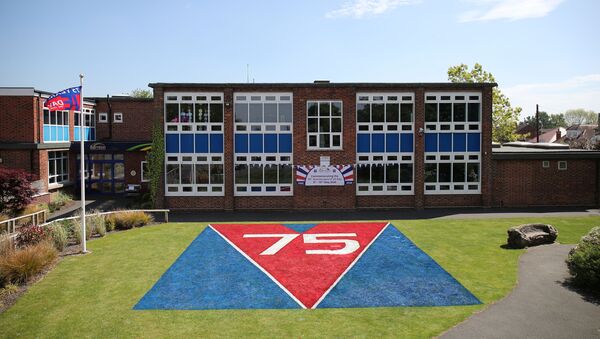 © REUTERS / Molly Darlington
Subscribe
Nursery and primary pupils could return to classes from June 1 following the announcement of plans for a phased reopening of schools. Ministers face increasing pressure to reconsider the plans over fears it may put children at risk from coronavirus.

The UK government is facing pressure from councils and teaching unions to reconsider their decision to reopen primary schools in England for some children from 1 June.

According to the BBC, at least 11 councils have voiced their concerns.

The Justice Secretary, Robert Buckland, told BBC Breakfast that 1 June was "an important date for everyone to work towards" but he said the government accepted there may be "issues" from employers that need to be addressed "which might not mean that we'll see a uniform approach".

​The government has said it wants children in nursery, reception, year 1 and year 6 to begin a phased return to schools from 1 June with other years following soon after, so primary children are in school for a month before the summer holidays, as long as the government’s five tests for easing lockdown have been met.

Schools in Wales will not reopen on 1 June, while those in Scotland and Northern Ireland may not restart before the summer holidays.

Faye Morris, a primary school teacher based in London told Sputnik that teachers are desperate to see their classes again but are anxious about returning to the classroom.

“We know that within younger year groups, social distancing will simply not be possible so those adults will be asked to ‘risk it’,” she said.

“I also question the rationale behind the idea that this improves children’s education and wellbeing as they won’t be experiencing the full curriculum and the majority will be separated from their class teachers and most of their peers.”

She added, the reality is that many of the most vulnerable and those that require the most support will be kept at home anyway.

At the time of publication, the official UK coronavirus death total has risen above 35,000.

The Government revealed on Tuesday that 545 more people had died in all settings after contracting Covid-19, taking the official total to 35,341.