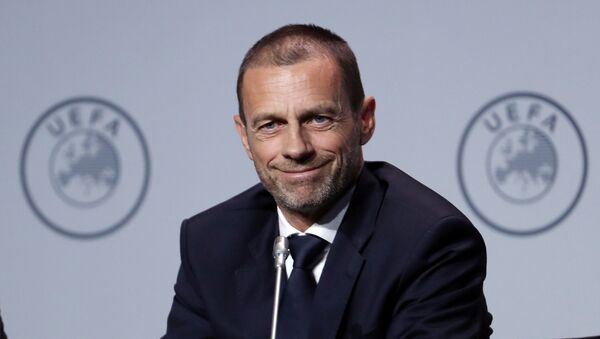 Along with many other public events, the 2020 European football championship competition was rescheduled to 2021 due to the coronavirus pandemic that has seen all countries impose lockdowns and prohibit large gatherings of people.

UEFA President Aleksander Ceferin said that he would bet a million dollars that Euro 2020 will be played in 2021, when asked by the Guardian, saying that he "doesn't know why it wouldn't be" and expressing hopes that the coronavirus pandemic will not last forever.

"Yes, I would […] I don’t know why it wouldn’t be. I don’t think that this virus will last for ever. I think it will [change] sooner than many think", Ceferin said, when asked about the possible bet.

He also said that he is personally sure that football with fans in attendance will return very soon.

"I don’t like this apocalyptic view that we have to wait for the second and third waves or even a fifth wave […] people you know are likely to die one day, but do we have to be worried today? I don’t think so. We are ready and we will follow the recommendations of the authorities but I’m absolutely sure, personally, that good old football with fans will come back very soon", he stated.

Ceferin complained that he has experienced a sleeping disorder amid the current pandemic and its impact on the world and on football, noting that "there is a lot of work still to be done". Due to the huge amount of information and the realization that "dozens of millions of dollars" will be lost due to the lockdowns caused by the pandemic, "it is hard to fall asleep at night" the influential sports executive said.

In March, UEFA pushed the 2020 tournament to 2021 because of the lockdowns caused by the coronavirus pandemic that has already claimed over 320,000 lives globally.  The championship is planned to become the first to be played in 12 stadiums in 12 countries, not in just in one country or two neighbouring states.

The COVID-19 lockdowns also resulted in the Tokyo 2020 Olympics, the NBA season, Italy's football championship and all other major sporting events to be postponed.