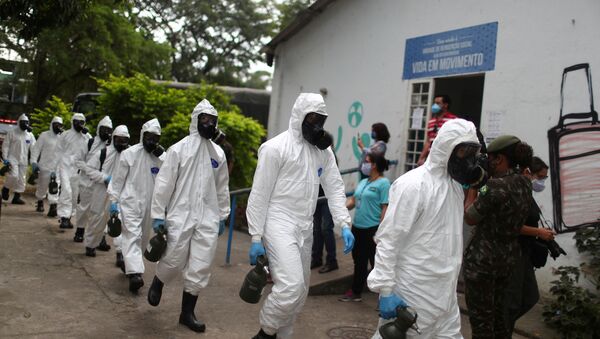 © REUTERS / Pilar Olivares
Subscribe
International
India
Africa
Brazil's coronavirus count has grown rapidly in recent weeks, making it the third-largest in the world, overtaking the UK, Italy and Spain. The Trump administration had earlier restricted travel from dozens of countries including China, the European Union, Canada and Mexico.

US President Donald Trump said on Tuesday that he is considering a travel ban on Brazilians coming to the United States as the Latin American country has turned into a fresh coronavirus hotspot.

“We are considering it. We hope that we’re not going to have a problem,” Trump said of travel restrictions during a Cabinet meeting, adding that he is concerned about Brazilians arriving in Florida.

Brazil, which became a loyal US ally under President Bolsonaro, had its biggest single-day spike in new coronavirus cases and deaths on Tuesday. It has registered close to 18,000 deaths and 272,000 cases as of Wednesday morning, giving it the world's third-biggest caseload after the United States (over 1.5 million) and Russia (around 300,000).

Jair Bolsonaro, meanwhile, has been campaigning for reopening the country and clashed with state governors who have imposed strict lockdowns to curb the spread of the virus.

Trump on 31 January issued an order that blocked most foreign nationals from travelling to the United States if they had visited China within the previous 14 days. On 11 March, he imposed similar restrictions on the 26 nations in the European Schengen Area (days later, it was expanded to include the UK and Irish citizens).

The US had also restricted travel across the nation's land borders with Mexico and Canada. It was announced on Tuesday that the restrictions, which were set to expire this week, would be extended until 22 June.

There has been no specific timetable for lifting the travel limitations. Steven Mnuchin, the US Treasury secretary, said earlier this month that it was “too hard to tell” if the US would loosen them in 2020.