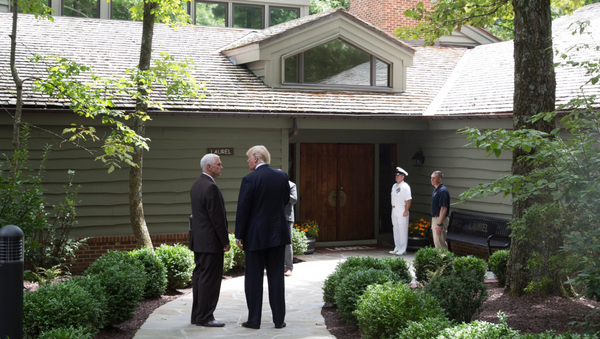 In March, Trump said that he would cancel the G7 summit at Camp David in June due to the coronavirus pandemic and would have a video-conference instead.

US President Donald Trump said on Twitter that he is thinking about rescheduling the G7 summit at Camp David.

Now that our Country is “Transitioning back to Greatness”, I am considering rescheduling the G-7, on the same or similar date, in Washington, D.C., at the legendary Camp David. The other members are also beginning their COMEBACK. It would be a great sign to all - normalization!

French President Emmanuel Macron is open to travelling to Camp David for the G7 summit in June if sanitary conditions allow, the Elysee Palace official said on Wednesday, as quoted by Reuters.

In March, the White House announced that an in-person meeting of G7 leaders would be cancelled over the coronavirus outbreak and that a video conference between the group's leaders would be held instead.

The 46th G7 summit was scheduled to take place on 10-12 June at Camp David, the country retreat for the US president in Maryland.​

The Group of Seven (G7) is an international intergovernmental economic organisation that consists of the seven largest IMF- advanced economies: the United States, Italy, Japan, Canada, France, Germany, Britain as well as the European Union.