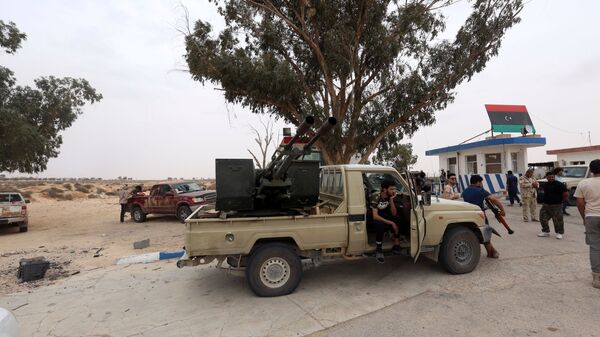 © REUTERS / Stringer
Subscribe
International
India
Africa
MOSCOW (Sputnik) - Moscow supports any initiative aimed at putting an end to the bloodshed in Libya and expects the parties to the conflict to cease fire at least for the period of the Eid al-Fitr Muslim holiday, a source in the Russian Foreign Ministry said on Wednesday.

"We are calling all the time for a ceasefire, for a humanitarian pause in connection with the Ramadan, and we have seen relevant initiatives, including that of Haftar. We will certainly support any initiative that is aimed at ending the bloodshed and returning to the negotiations table," the source said, commenting on Haftar's move.

Moscow expects all the parties to the Libyan conflict to cease fire, at least for the period of Eid al-Fitr, the source added.

"We are calling on all the parties engaged in military actions to cease military activities and switch to a political process," the source said, when asked whether Moscow expects GNA to withdraw forces as well.

In the early hours of Wednesday, the Libyan National Army (LNA), led by Field Marshal Khalifa Haftar, announced the withdrawal of its forces to a distance of 2-3 kilometers (1.2-1.8 miles) from Tripoli in connection with the holiday. The LNA also expects the Government of National Accord (GNA) to follow suit and withdraw its units later on Wednesday.