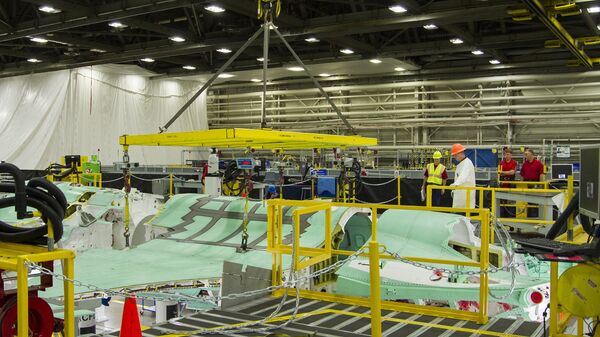 Ilya Tsukanov
All materialsWrite to the author
In a related development, last week, the Government Accountability Office concluded that as many as 15 key components for the F-35 once made in Turkey were currently not being produced “at the needed production rate” following Ankara’s unceremonious removal from the fighter programme.

Lockheed Martin’s F-35-related supply chain problems have been exacerbated by the coronavirus pandemic, with the company expected to reduce output of finished planes by anywhere from 12 to 15 percent this year, Defense News has reported, citing company officials and figures.

Originally planning to build 141 of the planes in 2020, the company now expects to produce anywhere between 18 and 24 fewer F-35s.

Lockheed Martin VP for the F-35 programme Greg Ulmer blamed the coronavirus pandemic for the new difficulties, which will see employees at the Fort Worth, Texas assembly plant reducing work hours starting May 23, confirming that at present, workers are having to wait for missing parts to arrive, thus preventing the line from moving forward.

“If I have the ability to speed up or recover sooner, then I will do so. If there are other unknown COVID-19 impacts that I don’t know about that come on the horizon – I don’t know that either…As we go forward, probably late summer or early fall, we’ll have a pretty good sense of where we’re going to be,” Ulmer said.

Lockheed told investors that production could be slowed back in late April, attributing slowing output to social distancing requirements at factories, workforce disruptions, and shipping constraints.

The F-35, an incredibly complex (and arguably overengineered) universal fifth-generation fighter jet, consists of over 300,000 individual components, which are produced across some 1,900 individual factories in the US, and dozens more in US allied nations such as Italy.

Trump hinted at the need to bring more of the F-35 supply chain back to the United States last week, suggesting that the reasoning for producing the plane’s components overseas was a sign of “stupidity.”

“I could tell you hundreds of stories of the stupidity that I’ve seen. As an example, we make a fighter jet. It’s a certain fighter jet, I won’t tell you which, but happens to be the F-35,” Trump said, speaking to Fox News Business on Thursday. “It’s a great jet, and we make parts for this jet all over the world. We make them in Turkey, we make them here, we make them there. The problem is, if we have a problem with a country, you can’t make the jet. We get parts from all over the place. It’s so crazy. We should make everything in the United States,” he added.

The coronavirus-related supply problems reported by the company follow news last week that the Government Accountability Office in Washington calculated that over a dozen key components for the F-35 once made in Turkey were not being produced in the necessary quantities by alternative suppliers following Ankara’s booting from the programme over its decision to buy a Russian-made air defence system. The GAO said that issue was just one of the problems which saw parts delivered late thousands of times in recent years, with over 60 percent of the shortages said to be attributable to just 20 tardy suppliers.

Lockheed Martin’s F-35 do-it-all universal fighter jet is the most expensive weapons contract in history, with its total lifetime R&D, production and operation price-tag recently jumping by another $100 billion to $1.6 trillion over its planned 66 year life cycle. Five years after the plane’s production began in 2015, the plane is still said to have well over 800 bugs, glitches and design problems, from ear-damaging cabin pressure issues to faulty radar and software-related vulnerabilities.