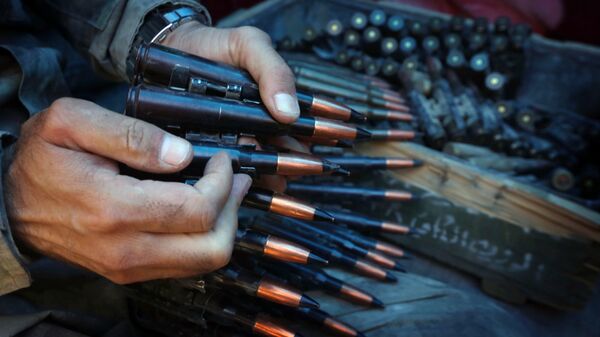 Ilya Tsukanov
All materialsWrite to the author
Over the past three years, authorities in Syria have seized enough terrorist weapons, ammunition, communications equipment and medical supplies to field a small army. Many of the arms were covertly delivered to the country from abroad, and paid for by powers seeking the illegal armed overthrow of Syria’s government.

Photos of the haul show over a dozen heavy machineguns, a cache of rocket propelled grenade launchers, some of them still sealed in their protective wrapping, hundreds of boxes of ammo of various calibers, and at least six US-made TOWs, as well as Israeli-sourced M72 LAW bazookas. Other equipment includes automatic rifles, sniper rifles and hand grenades.

Quantities of weapons and ammunition, including #US-made missiles, left behind by terrorists in the southern region of #Syria, has been seized today. pic.twitter.com/HLj0YaHm9h

The weapons are said to have been seized during recent operations to comb through liberated areas in the provinces of Daraa and As-Suwayda along Syria’s southern border with Jordan.

A government source speaking to SANA said it’s common for authorities to find US and Israeli-made weapons amid stocks of weapons once used by the terrorists, with the military also discovering dozens of tunnels, underground weapons depots, and large quantities of logistical equipment and command and control headquarters once used to attack Syrian Army strongpoints and civilian areas.

In recent years, amid its successful operations to bring areas once held by rebels and jihadist militants back under Damascus’s control, the Syrian Army has discovered tens of thousands of tonnes-worth of weapons, ranging from small arms and rocket launchers to C4 explosives, custom machine-gun armed trucks and even tanks. Although some of the arms were stolen from Syrian state armouries during the unrest which broke out in 2011-2012, many others were smuggled into the Arab Republic by the US, European countries, Israel, Turkey and Gulf nations in a bid to topple the Assad government. The US operation, known as ‘Timber Sycamore’, was overseen by the CIA and then-Vice President Joe Biden, and terminated by the Trump administration in 2017. Israel formally admitted to its role in arming and supporting militant groups in Syria in 2018.