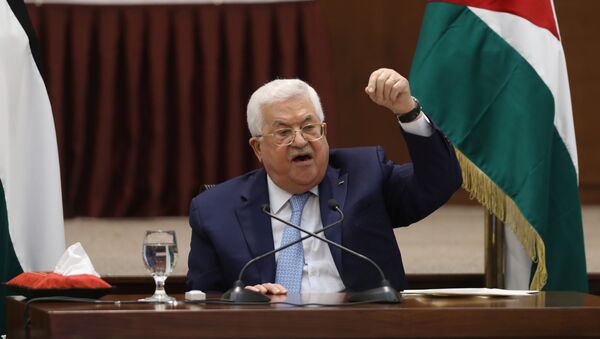 The head of the Palestinian Authority, Mahmoud Abbas, has repeatedly warned Israel that he will tear up any bilateral agreements with the Jewish state if Tel Aviv attempts to further extend its sovereignty over parts of the West Bank, a possibility left open by Israel's new unity government.

Palestinians have terminated all agreements with Israel and the US amid Tel Aviv's intention to extend its sovereignty over "the Palestinian lands", the head of the Palestinian Authority, Mahmoud Abbas, stated Tuesday.

"The Palestine Liberation Organization and the Palestinian State today has discharged all obligations under all agreements with the governments of the United States and Israel, including those related to security", Abbas said to the Al Jazeera TV channel.

The agreements Abbas hinted at, without directly mentioning them, allegedly include a series of documents signed in the 1990s during the Israeli-Palestinian conflict resolution process among which are the Oslo Accords, the 1997 Hebron Protocol and the 1998 Wye River Memorandum.

The Palestinian leader called on Israel to bear the full responsibility to the international community from now on as an "occupying force in the occupied territory of Palestine."

Abbas also insisted on the "accession of the State of Palestine to international organizations and institutions, in which we are not yet included".

The move takes place amid plans by Tel Aviv to extend its sovereignty over parts of the West Bank, an intention backed by Washington and strongly condemned by Palestinians and much of the world.

Abbas slammed the US, accusing the Trump administration of "injustice towards the Palestinian people".

"We hold the United States fully responsible for the injustice towards the Palestinian people, we consider them the main partner of the occupying Israeli government in all its hostile decisions", Abbas stated in his speech.

According to Abbas' statement, the Palestinians are ready to return to negotiating the Israeli-Palestinian conflict again, provided that there is a third party participating.

The Israeli unity government newly formed by Benjamin Netanyahu and Benny Gantz revealed plans to extend sovereignty over parts of West Bank as early as 1 July based on a "peace plan" proposed by US President Donald Trump. The Palestinian ambassador to Moscow, Abdel Hafiz Nofal, labeled this move as efforts by Tel Aviv and Washington "to use the difficult epidemiological situation to realize their occupation plans", referring to the ongoing COVID-19 pandemic.

Trump's plan for Israel and the Palestinians was introduced in January and, in particular, envisaged the extension of Israeli sovereignty over the West Bank and the Jordan Valley, recognition of Jerusalem as the "sovereign capital of the State of Israel", that should remain an undivided city". The plan received harsh criticism from Abbas, who has continued insisting on restoring the pre-1967 borders of the Palestinian lands.