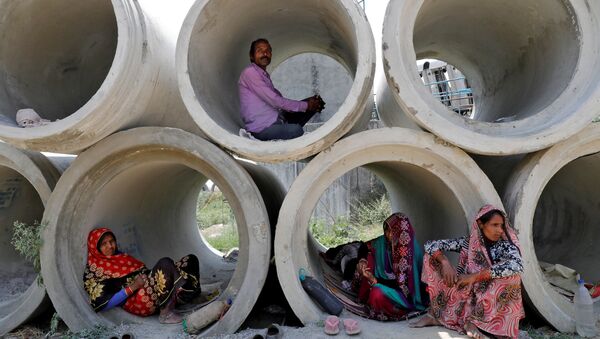 New Delhi (Sputnik): Caught between joblessness and hunger, tens of thousands of Indian migrant labourers were making their way home from their workplaces, amid the prolonged lockdown clamped to contain the spread of COVID-19, while dozens have lost their lives on the roads.

In the latest series of accidents, 13 furloughed workers lost their lives while dozens more were injured in two separate accidents – one in Maharashtra and another in Bihar state early Tuesday morning.

In Maharashtra, four migrant workers were killed and 15 injured when a bus they were travelling in crashed into a truck in Yavatmal early on Tuesday. The bus was on its way from Solapur in Mahrashtra to Jharkhand.

Maharashtra: 4 migrant workers killed, 15 injured after a bus they were travelling in crashed into a truck, in Yavatmal, early morning today. The bus was travelling from Solapur to Jharkhand. pic.twitter.com/kEURdmqTOx

​In Bihar’s Bhagalpur district, at least 9 labourers were killed and several injured when a truck and bus they were travelling in collided and fell off the road, reports news agency ANI.

Bihar: At least 9 labourers dead & several injured after a truck & a bus collided in Naugachhia, Bhagalpur. The truck in which the labourers were travelling, fell off the road following the collision. Rescue operation underway. pic.twitter.com/rGVxw6xQVh

​Despite directives by the federal government to states to arrange transportation for migrant workers, the arrangements were far less than the number of people seeking to return to their homes.

The lockdown has entered the fourth phase, even as the spread of Coronavirus infection remains unabated. As on Tuesday, the caseload of COVID-19 crossed 100,000 mark. According to latest data released by federal Health Ministry, the cumulative caseload was at 101,139, which included 39,174 cured cases and 3,163 deaths.