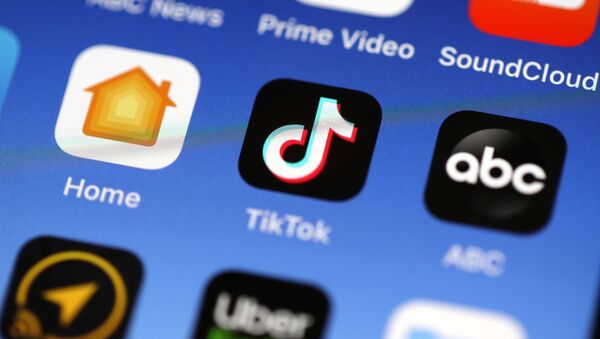 © AFP 2023 / JUSTIN SULLIVAN
Subscribe
International
India
Africa
New Delhi (Sputnik): Voices to ban TikTok in India are growing, with the latest video of Indian celebrity Faizal Siddiqui’s latest video being viewed as objectionable against the backdrop of an ongoing virtual war between Youtubers and TikTokers in the country.

Popular Indian TikTok star Faizal Siddiqui has raised many eyebrows on Twitter with his latest video glorifying acid attacks on women. However, Faizal later issued a clarification on Instagram stating that the first part of the video has been cut to make it appear different.

Siddqui has over 13 million followers on the Chinese short video-making app TikTok.

While India's National Commission for Women has taken note of it, a cybercrime police complaint (First Information Report) has also been filed against the TikTok star.
In the video, Faizal can be seen ridiculing a woman during break up and throwing liquid on her face in response. This has been largely perceived as "outrageous" on social media and the video is no longer available on the TikTok sensation's timeline.

He is Faizal Siddiqui, memeber of team nawab and brother of Amir Siddiqui

Is he promoting Acid attack on girls??

FYI he has 13.4M followers on Tiktok

In the clarification post on Instagram, the TikTok star shared the full video and clarified that he was drinking water and the "make up the girl was wearing was just her way of projecting her art".

My Intention was never to hurt anyone in any Capacity. As a social media influencer, I realize my responsibility and apologize to anyone who was offended by the video 🙏🏻 @ncwindia

Netizens are demanding action against the user as the hashtags #BanTikTok and #Acid are trending in the country. Some tweeples were enraged that "they" call themselves social media influencers.

What a shame..!!
How can you glorify yourself by promoting Acid Attacks..Shame https://t.co/imxxmzUFzs

​He is promoting acid attacks in his videos..!!!!Now where the hell are community guidelines?????Its a very crucial time... Tiktok should be banned in India immediately!!It's a very dangerous platform..!@PrakashJavdekar@narendramodi#BanTikTokInIndia pic.twitter.com/nF434hxApb

Dear @MumbaiPolice sir in this video this man is look like promoting acid attack
Please look at this and take strong decision against this kind of people@NCWIndia @MinistryWCDhttps://t.co/AP4V5W9WPl

This is FAIZAL SIDDIQUI. Promoting acid attack through his Tik Tok account and they call themselves as Social Media influencer! #BanTiktok pic.twitter.com/uYnxHNsvuv

I don't know what is wrong with senses of these tiktokers.. they really support acid-attack! Why the fuck this app is being used?To support this kind of crime! Which can actually ruin a person's life totally! #BanTiktok #FaizalSiddiqui #20MFORCARRY

​The fresh controversy comes at a point when a virtual contest is on between Youtubers and TikTokers in India in terms of content superiority.

Faizal Siddiqui is the brother of Amir Siddiqui, who was recently roasted by a popular Indian YouTuber and roast king Ajay Nagar, popularly known as Carry Minati.

Carry Minati's video jab video became the first non-musical video in the world to reach 10 million views. However, the video was reportedly taken down by YouTube for "cyber bullying".

Thereafter, #CarryMinati started trending on Twitter, with tweeples demanding that his video be restored.

India is one of the biggest markets for TikTok and the app has earlier been subjected to appeals by people in the country to ban the application for "inappropriate and vulgar content". The app was temporarily banned by some states, but was later restored.