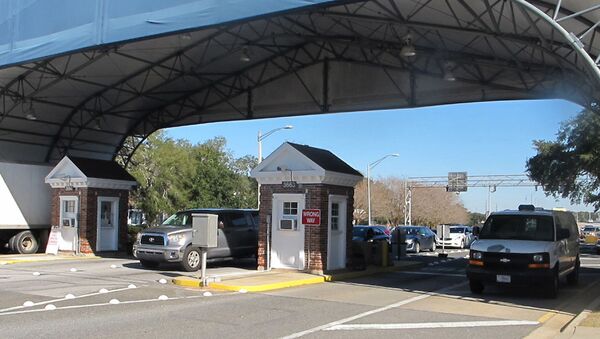 The Federal Bureau of Investigation (FBI) has found evidence linking Al Qaeda* to the 2019 shooting at a US naval base in Florida that left three people killed, United States Attorney General William Barr said in a statement.

"Today I am pleased to announce that thanks to relentless efforts and ingenuity of FBI’s technicians the FBI finally succeeded in unlocking al Shamrani’s phones. The phones contained information previously unknown to us that definitively established al Shamrani’s significant ties to al-Qaeda in the Arabian Peninsula not only before the attack, but before he even arrived in the United States", Barr said during the press conference.

Barr said Apple refused to help the US unlock the phones.

The shooter, Second Lieutenant Mohammed Saeed Alshamrani, 21, was a member of the Royal Saudi Air Force and was stationed at the base as part of a US Navy training programme designed to foster links with foreign allies, Reuters reported.

The US Justice Department said the phones’ contents revealed highly significant evidence that al Shamrani had joined the Royal Saudi Air Force in order to carry out a "special operation". Even while living in Texas and Florida, he communicated with AQAP associates about plans and tactics until the night before the attack.

FBI Director Christopher Wray said during the press conference that al Shamrani was meticulous in his planning.

"He made pocket-cam videos as he cased his classroom building. He wrote a final will, purporting to explain himself, and saved it in his phone - the exact same will that AQAP released two months later when they initially claimed responsibility", Wray said. "He wasn’t just coordinating with them about planning and tactics - he was helping the organisation make the most it could out of his murders".

Wray said the FBI searched the entire market for a solution to access the phones, but eventually had to devise one.

"[W]e did it ourselves. Unfortunately, the technique that we developed is not a fix for our broader Apple problem, it’s a pretty limited application, but it has made a huge difference in this investigation", Wray said.

Wray added that the investigation continues, but the contents of the phones revealed no active associates of the shooter in the United States.

US Authorities Probe Weekend Cyberattack on Pensacola After Navy Station Killings- Reports
Since the incident, the US Justice Department has been working on getting access to the shooter's phones to understand his motives and find possible connections to known terrorist groups.

Reuters reported that Al Qaeda in February claimed responsibility for the attack, although the group did not provide evidence.

Shortly after the shooting, the United States terminated all operational training for Saudi servicemen for an indefinite period.

*Al Qaeda is a terrorist group banned in Russia