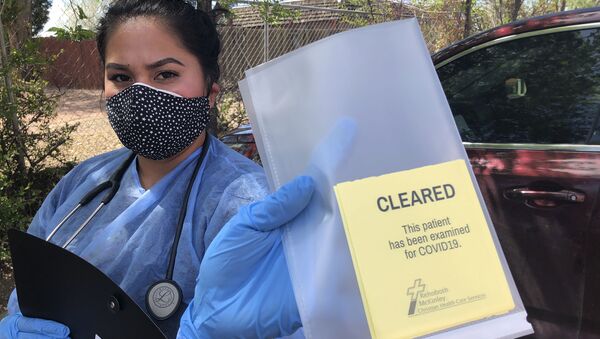 © Morgan Lee
Subscribe
Lilia Dergacheva
All materialsWrite to the author
Causing "disgust" from his colleagues, a representative for Alaska, Ben Carpenter, brought up a scenario of COVID-19 patients "being rounded up and taken somewhere".

An Alaska lawmaker has ignited a storm of reactions by drawing parallels between health screening stickers and the Star of David badges that Jews were forced to wear during the Holocaust, going on to argue that Adolf Hitler was not a white supremacist, a report by The Washington Post has it.

"If my sticker falls off, do I get a new one or do I get public shaming too?", wrote Rep. Ben Carpenter on Friday in an email to 29 colleagues, asking "Are the stickers available as a yellow Star of David?”

After an uproar ensued, Carpenter further attempted to clarify his stance saying, in comments to the Anchorage Daily News:

"Can you or I — can we even say it is totally out of the realm of possibility that COVID-19 patients will be rounded up and taken somewhere?”, he queried, going on to speculate about what had driven Hitler:

"People want to say Hitler was a white supremacist. No. He was fearful of the Jewish nation, and that drove him into some unfathomable atrocities".

One Jewish representative replied to the email, writing "Ben, this is disgusting". Another representative responded "I don't think a tag that we're cleared to enter the building is akin to being shipped to a concentration camp". The head of Alaska's House Republican delegation weighed in promptly, urging Carpenter to apologise for his blatantly provocative comments.

Rep. Grier Hopkins, the Jewish representative who likewise called Carpenter's words "disgusting" addressed the issue saying he would be "happy" to hear him explain how the crucial widespread lockdown measures may infringe on the Constitution, but added that he hopes "he understands that this is not the Holocaust, and how that massacred 6 million Jews, and how genocide is not health mandates", The Washington Post cited him as commenting.

In response to the backlash, Carpenter said he didn't intend to "rile somebody" and that he has "no ill will toward the Jewish nation and the Jewish people in our country". The representative argued that coronavirus measures are a slippery slope and claimed that the danger is past. "We have a way of life that is being threatened right now because we have shut down our economy", Carpenter addressed the economic fallout from the healthcare crisis.

The message fully reflects that of thousands of lockdown protesters, who likened sweeping stay-at-home regulations to Nazism, and President Donald Trump himself, who backed the protesters in a series of tweets calling to "LIBERATE" a handful states under lockdown rules. In response to questions about those who opposed the state orders, Trump stated:

"I think they'd listened to me. They seem to be protesters that like me and respect this opinion, and my opinion is the same as just about all of the governors", Business Insider quoted him as staying.

Amid increasing calls to ease the ubiquitous lockdown laws, the US has registered over 1.4 million confirmed COVID-19 cases (as of 17 May) with the number of related deaths approaching 89,000, according to fresh Johns Hopkins University estimates.