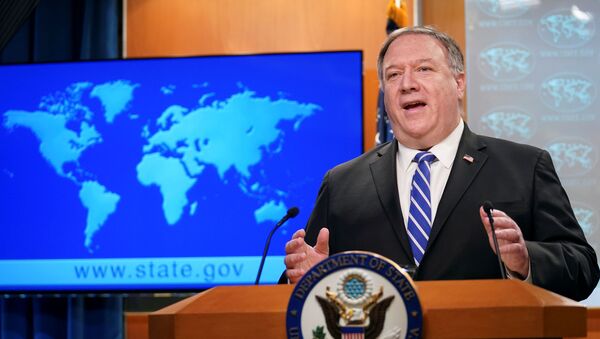 MOSCOW (Sputnik) - US Secretary of State Mike Pompeo warned China on Sunday that the United States could change its view of Hong Kong's status in light of what it sees as interference with free press.

The State Department has delayed until 22 May a report to Congress on the state of the former British colony's autonomy from China, which guarantees it special treatment.

"Any decision impinging on Hong Kong's autonomy and freedoms as guaranteed under the Sino-British Joint Declaration and the Basic Law would inevitably impact our assessment of One Country, Two Systems, and the status of the territory", he said in a press release.

Pompeo said he had been alerted to what he said were threats by the Chinese government to "interfere with the work of American journalists in Hong Kong".

"These journalists are members of a free press, not propaganda cadres, and their valuable reporting informs Chinese citizens and the world", he argued.

The US-China standoff escalated in March after Beijing said it would expel several journalists from three US publications and bar them from working in Hong Kong after Washington labeled Chinese state news outlets in the US as foreign agents. Washington claims Beijing's actions to be an attempt by the Chinese authorities to impede the work of journalists in the country.

Before that in February, China revoked the press credentials of three Wall Street Journal reporters for publishing an opinion piece by foreign policy scholar Walter Russell Mead that was critical of China's efforts against the coronavirus disease.