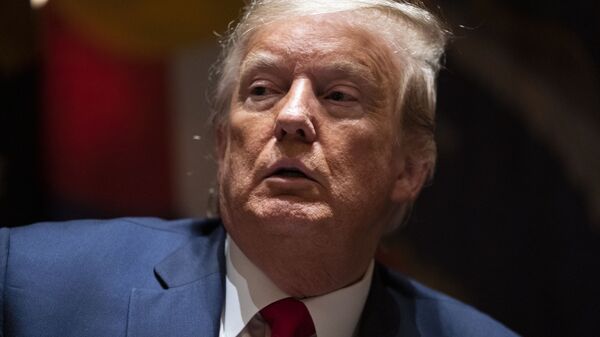 Tim Korso
All materials
The cybercriminals earlier threatened to publish allegedly incriminating documents on the POTUS in a bid to pressure the law firm Grubman Shire Meiselas & Sacks to pay a ransom of $42 million for stolen data on their clients, mostly prominent celebrities.

A group of hackers known as REvil has published the first portion of so-called "dirty laundry" on US President Donald Trump, which they called the "most harmless" part of it, Forbes reported, citing information obtained from cybersecurity analyst Brett Callow.

REvil stole several gigabytes of files from the computer network of the law firm Grubman Shire Meiselas & Sacks and used the "dirt on Trump" card as an attempt to pressure the company into paying a $42 million ransom for the stolen data. However, there are no indications that Trump has ever used the company's services.

"The next person we’ll be publishing is Donald Trump. There’s an election going on, and we found a ton of dirty laundry on time [...] Mr. Trump if you want to stay president, poke a sharp stick at the guys, otherwise, you may forget this ambition forever", REvil's publication said.

The group stated on 15 May that it gave the firm one week to pay the ransom before it releases the documents, but apparently chose to speed up the process after the FBI classified the case as "terrorism", thereby eliminating the option for Grubman Shire Meiselas & Sacks to pay the ransom without breaking the law.

The 169 emails that the group reportedly released on the darknet mention Trump's name only in passing and have no incriminating value. But the group claims it has more than that. In a note accompanying the publication, REvil promises to start auctioning parts of the stolen information to the highest bidders each week, suggesting that the "dirt" on Trump might be of interest to his likely rival in the 2020 election, Joe Biden.

"I would hurry up. In the place of your competitor, I would buy all the data and put it right at the start of the election. That would be fun. But you can get ahead of him", the cybercriminal group said.

During the election in 2016, Trump's campaign suffered a blow from the so-called Steele Dossier, which seemed to indicate that Trump had unofficial ties with the Russian government, spurring accusations that he had colluded with the Kremlin to rig the election. Despite the dossier's publication, Trump won the election and the findings revealed in the document, which was funded by the Democratic Party and its candidate Hillary Clinton, later proved to be highly unreliable if not outright made up.

The dossier still resulted in major turmoil that undermined the activities of the Trump administration in the first years of his presidency, as it led to the so-called Russia probe that looked for non-existent collusion between Trump's campaign and Russia.