China Reveals Preliminary Cause of Its Envoy's Death, Sends Team to Israel for Investigation 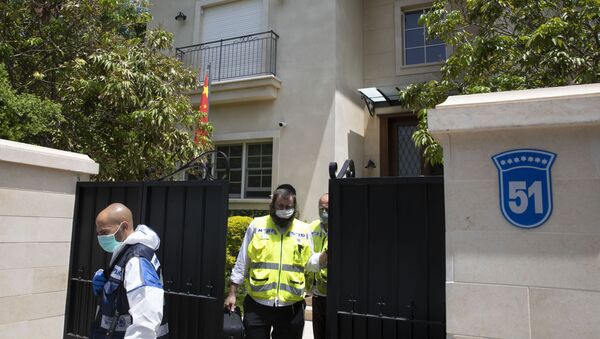 Du Wei, 57, who was appointed envoy to the Middle Eastern country in February, was found dead at his home in Herzliya on 17 May. His death comes a week after US Secretary of State Mike Pompeo visited Israel. The US official reportedly pressed Israeli authorities to limit cooperation with the Chinese government.

The Chinese Ambassador to Israel died from natural causes, Beijing said in a statement. "The preliminary verdict is that Ambassador Du Wei died unexpectedly of health reasons. The details await further confirmation", read the statement from the Chinse Foreign Ministry. Beijing said that it would send a special investigator to investigate the envoy’s death.

Micky Rosenfeld, spokesman for the Israeli police, said officers had arrived at the ambassador’s house as part of its regular procedure but did not conduct an investigation. According to Rosenfeld, upon arriving in Israel, Du had spent 14 days at home in self-isolation due to safety measures introduced in response to the coronavirus outbreak. His wife and son were not with him in Israel.

The ambassador’s death comes amid an escalating war of words between China and the United States over the coronavirus pandemic. Senior US officials, including President Trump, have accused Beijing of covering and inadequately responding to the disease, which allowed it to spread to other countries. The Chinese authorities have denied the claim.

In his op-eds in Israel’s Jerusalem Post newspaper as well as his public statements, the ambassador had rejected the claim that Beijing was responsible for the spread of the disease.