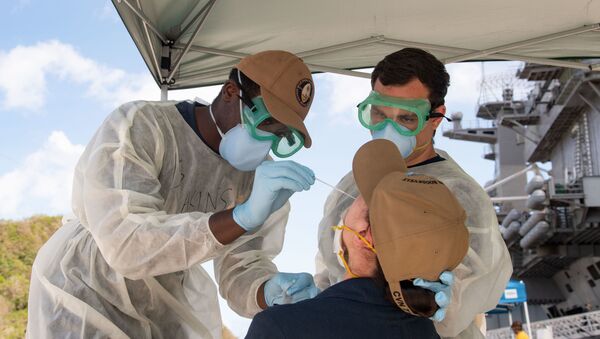 © US Navy/Seaman Kaylianna Genier
Subscribe
The development comes as the number of those infected with the SARS-CoV-2 strain of coronavirus is gradually approaching the five million mark. Almost 314,000 people have succumbed to the disease and 1.8 million have recovered.

A coalition of 62 countries, including Britain, Indonesia, Japan, Russia, South Africa, South Korea, and Turkey, have backed a joint Australia-EU initiative for an independent investigation into the coronavirus outbreak, ABC news reported. It calls for an "impartial, independent and comprehensive evaluation of the World Health Organisation-coordinated international response to COVID-19".

Australia was the first nation to call for an inquiry into the origins of the virus. This prompted an aggressive response from China, with Beijing describing the decision as a propaganda war launched by the United States and accusing Canberra of parroting some US officials.

However, the joint EU-Australian motion does not mention China or Wuhan, where the first cases of the coronavirus were reported. It stressed the need for the WHO to work with the World Organisation for Animal Health to conduct "scientific and collaborative field missions" and "identify the zoonotic source of the virus and the route of introduction to the human population, including the possible role of intermediate hosts".

"This is about collaborating to equip the international community to better prevent or counter the next pandemic and keep our citizens safe", said Australia’s Foreign Minister Marise Payne.

Neither the United States nor China has backed the motion. Previously, senior US officials, including President Donald Trump, called for a specific probe into Beijing’s handling of the virus. The US president accused Chinese authorities of a cover up, which he said allowed the virus to spread all over the world.

Virginie Battu-Henriksson, the European Union’s spokeswoman for foreign affairs, assured that the motion tabled by Canberra and Brussels is not focused on putting the blame on a certain party, saying it was about "getting together and finding a solution which is workable for all".