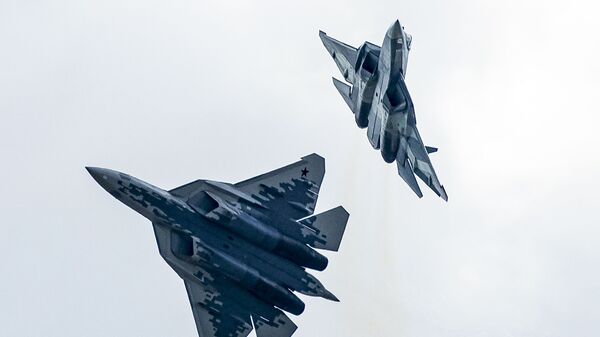 © AP Photo / Pavel Golovkin
Subscribe
International
India
Africa
MOSCOW (Sputnik) – Russia's fifth-generation Su-57 fighter jet is working on the use of an unpiloted mode during tests, a source in the defenсe industry said.

"The T-50 flying laboratory is testing an unpiloted mode. A pilot is in the cockpit during a flight but is just controlling the operation of all systems", the source said.

The Sukhoi Su-57 (formerly known as PAK FA, or T-50) is a cutting-edge fighter jet that performs the functions of a strike aircraft and a fighter and is capable of destroying all types of air, ground and naval surface targets.

The Russian Defence Ministry placed an order for 76 Su-57 jets during the Army-2019 International Military and Technical Forum. The warplanes should be delivered to the Russian Air Force by 2028. A total of 13 jets have been made so far.

Previously, the United Aircraft Corporation (UAC) revealed the story behind the name of the aircraft. Su is a reduction of Sukhoi, the surname of a famous Russian aerospace engineer. Number 5 stands for the fifth-generation of Russia’s fighter jets, while seven is a lucky number for the Sukhoi Design Bureau.