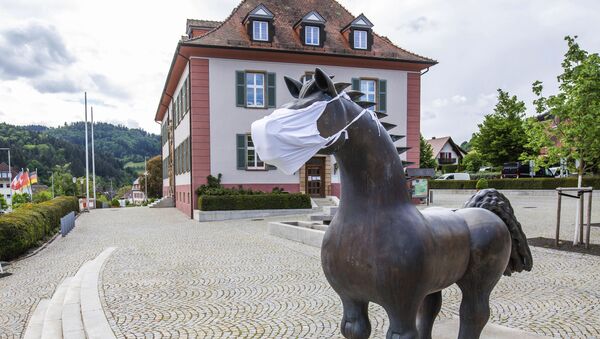 Subscribe
The pandemic continues to spread across the world, with over 4,600,000 infected globally, according to Johns Hopkins University. The health crisis has resulted in travel bans and social distancing restrictions in numerous countries.

The United States remains the worst-hit country in the world, having registered over 1,4 million COVID-19 infections and more than 88,700 deaths. Russia and Great Britain now occupy second and third places in terms of infected, with over 272,043 and 241,461 confirmed cases of coronavirus, respectively.

At the same time, New York remains the city hardest hit by the virus, with more than 28,000 fatalities.

BEIJING (Sputnik) - China registered five new coronavirus cases in the past 24 hours, eight COVID-19 patients recovered over that period, while the death toll remains the same as one week ago, the country's National Health Commission said on Sunday.

Out of the five new cases, two are imported. According to the commission, China has registered a total of 1,700 imported coronavirus cases.

China registered 12 asymptomatic coronavirus cases in the past 24 hours, all but one of them of internal transmission.

MOSCOW (Sputnik) - Nepal confirmed its first coronavirus-related death after analyzing nasal and throat swabs from a woman who had recently given birth and who died on her way to the hospital, the country's Health Ministry said in a statement.

"A detailed investigation and a series of tests show that this is the first death due to COVID-19 in the country", the Health Ministry's deputy spokesperson, Dr Sameer Kumar Adhikari, said in a statement quoted by Nepal's The Kathmandu Post daily on Saturday.

The 29-year old woman gave birth on 6 May and was discharged the next day with both the mother and the baby in good health. Shortly after returning to her home village, the woman reported a fever and respiratory difficulties, according to the Health Ministry. She died on her way to the Dhulikhel Hospital, where she was referred to on 14 May.

BUENOS AIRES (Sputnik) - Brazil registered more than 800 COVID-19 deaths over a 24-hour period, bringing the total coronavirus death toll up to over 15,600 in the country, where public discontent with the government response to the spread of the virus has been growing.

More than 2,300 suspected coronavirus deaths are being analysed, according to Brazil's Health Ministry. In the past 24 hours 14,919 new coronavirus cases have been confirmed, the ministry said on Saturday. Brazil now has a total of 233,142 confirmed COVID-19 cases.

MOSCOW (Sputnik) - Israel registered only two new coronavirus cases and one new death from COVID-19 on Saturday, the country’s Health Ministry announced on the eve of school reopening.

Israel now has a total of 16,608 confirmed coronavirus cases with 3,485 people currently being treated for COVID-19. The country's total death toll from the viral disease stands at 268, while more than 12,850 people have recovered.

Starting from 20 May, people in Israel will be allowed to go to public beaches. Mass gatherings of no more than 50 people are already allowed.

21:29 GMT 16.05.2020
Coronavirus State of Emergency to Be Lifted in Estonia Starting Next Week - Government

"The restrictions imposed during the emergency situation will be gradually eased and new legal bases will be provided", the government said in a Saturday statement, adding that "the need to extend the emergency situation is no longer necessary as the amendments of relevant laws ensured sufficient basis for both the Government and Government authorities to promptly re-establish measures to prevent the spread of COVID-19 disease, if necessary".

"Seventy-one patients with diagnosed pneumonia and a positive coronavirus test result have died in Moscow", the COVID-19 response centre said.

Moscow reported 74 more deaths on Friday evening. The death toll has now climbed from 1,432 to 1,503. With 138,969 confirmed infection cases on Friday, the city has more than a half of Russia's total cases.

MOSCOW (Sputnik) - The global number of those infected with the coronavirus has increased by 86,827 over the past day, reaching 4,425,485 COVID-19 cases, the World Health Organisation showed on Saturday.

The death count stands at 302,059 people, with almost 5,000 deaths recorded in the past 24 hours, according to the WHO dashboard.

ANKARA (Sputnik) - Turkey's coronavirus tally rose by 1,610 to 148,067 confirmed cases in the past day, statistics published Saturday by the Health Ministry showed.

Further 41 patients diagnosed with COVID-19 died in the past day, bringing the death toll to 4,096. The number of recoveries rose to 108,137 after 2,003 coronavirus patients tested negative.

Health Minister Fahrettin Koca said on Twitter that Turkey was seeing a predictable slowdown in the recovery rate, but the share of patients moved to intensive care was also going down.

Furthermore, 16 fatalities over the past 24 hours have taken the total to 314 deaths since the beginning of the outbreak while just over 4,000 people have been discharged.

The Bangladeshi government-issued curfews and movement restrictions across the country but stopped short of shutting down textile and manufacturing industries which provide vital income for the developing nation.

Shops and malls are allowed to work no later than 6 pm local time with a limited amount of customers at any given time.

PARIS (Sputnik) - Fewer than 100 people died from coronavirus complications in France in the past day, with the total rising to 27,625, the Health Ministry said Saturday.

The death toll rose by 96 from 27,625 recorded on Friday, according to the press release.

A total of 19,432 patients are being treated for COVID-19 in hospitals, down from 22,614 on Saturday last week. Further 350 people were admitted in the past day.

Of those hospitalised, 2,132 people are in intensive care, up from 2,812 last week. Forty-six people were transferred to ICU in the past 24 hours, up from 38 a week ago.

Thailand has extended its ban on international civilian air travel from its June 1 deadline to June 30, the Civil Aviation Authority of Thailand said in a statement Saturday.

This will be the third such extension to the flight ban imposed in early April to curb the spread of coronavirus in the country.

The ban will put further strain on the country’s vital tourism industry, which accounted for 20 percent of GDP in 2019.

Although Thailand was one of the first countries outside China to detect coronavirus infections, it has succeeded in maintaining a lid on explosive growth in the number of cases, with a mere 3,025 cases detected overall, of which 2885 have recovered while 56 have passed away, according to the health ministry.

MOSCOW (Sputnik) - A vaccine against COVID-19 developed by the N.F. Gamaleya Research Institute of Epidemiology and Microbiology could be registered and enter production by the end of the summer, Director Alexander Gintsburg said.

He was interviewed for a documentary film called Dangerous Virus 5 broadcast by the Russia 1 TV channel.

"By the summer's end, I think. I would like to think so, that's how I would reply", Gintsburg said when asked about the vaccine's production and registration.

The director elaborated that the vaccine is currently in the stage of preclinical trials necessary to receive permission from the Health Ministry for human trials. This stage will probably last another month, according to him.

The ministry is currently working out what facilities it could free up to keep them busy with manufacturing the vaccine, Gintsburg added.

Russia has recorded 9,200 new COVID-19 cases over the past 24 hours, with 3,505 of them in the capital, according to official data. At the same time, the number of new cases in Moscow is less than 5,000 for the fourth day in a row.

07:20 GMT 16.05.2020
US May Partially Resume WHO Funding at Level of China's Contributions, Reports Suggest

MOSCOW (Sputnik) - The Trump administration may partially resume funding of the World Health Organisation (WHO), which was suspended amid a row over its handling of the coronavirus pandemic, but the amount of potential contributions will be smaller and commensurate with those made by China, Fox News reported, citing a draft letter to the WHO chief.

The draft letter to WHO Director-General Tedros Adhanom Ghebreyesus, obtained by the broadcaster, said that Washington will "agree to pay up to what China pays in assessed contributions" to the WHO.

The draft noted that the United States saw certain problems in the work of the WHO but believed that the organisation had great potential.

"If China increases its funding to the WHO, we will consider matching those increases”, the letter read.

The previous level of funding by the US was around $400 million per year and Washington was the WHO's biggest donor. If the United States continues to fund the organisation in the same volume as China does, the new funding will be about one-tenth of the country’s previous yearly contributions, according to the broadcaster.

In April, Trump ordered that his country's funding of the WHO be halted over negligence, claiming that the UN health agency had impeded the global response to the coronavirus pandemic and let it spread by covering up the true scale of the initial COVID-19 outbreak China. The move was met with criticism from the WHO and the international community. At the same time, US Secretary of State Mike Pompeo did not rule out that Washington would never restore WHO funding.

India's coronavirus cases have officially surpassed China as the federal Health Ministry on Saturday reported 85,940 cases with 2,752 deaths.
China, where the virus was first detected in December 2019, reported 82,933 cases and 4,633 deaths.

India is currently in the third phase of its lockdown, which is coming to an end on 17 May. The government is likely to announce a further extension or relaxation in the lockdown as the country continues to witness a spike in cases despite the measures implemented.

MOSCOW (Sputnik) – The Italian government is going to lift a coronavirus-linked ban on trips between the country's regions as well as travelling abroad starting 3 June, the Council of Ministers said on Saturday in a statement.

Italy significantly restricted people's movement between the country's regions and even within them amid the outbreak of COVID-19 in mid-March. On 4 May, the country eased the restrictions, allowing people to visit their relatives within their region.

According to the government's statement, starting 18 May, there will be no restrictions on movement within Italian regions. At the same time, Italian citizens will not be allowed to use public transport or personal vehicles outside regions of residence until 3 June. Journeys to and from foreign countries will be banned until the same date.

The cabinet stressed that there could be further restrictions on people's movement in line with the government's decisions that would be made depending on the epidemiological situation.

AngloInAShitho
16 May 2020, 18:31 GMT4
000000
The Plot to disperse a mutant strain of Covid19 in the hyper-busy transportation hub of Wuhan, China must have occurred in the Zionist US stronghold of New York City, home of the Zionists. Blowback on the source nation, chickens coming home to roost, bad karma taking down the source all come to mind.