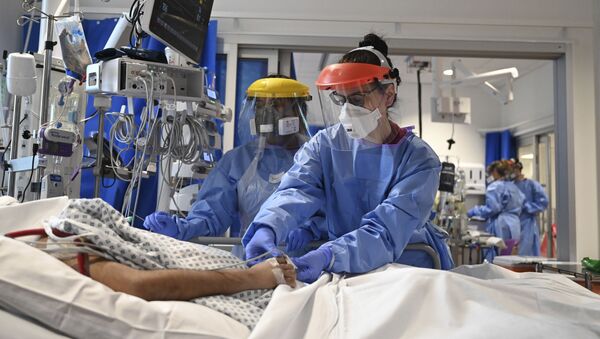 © AP Photo / Neil Hall
Subscribe
Lilia Dergacheva
All materialsWrite to the author
According to WhistleblowersUK, which was incentivised by the health department to speak up about burning issues in the health sector, the group has been contacted by at least 100 medical staffers over a lack of protective kit supplies for frontline COVID-19 workers.

Some NHS managers have attempted to silence doctors willing to speak out against existing shortages of personal protective kits, the BBC reported citing WhistleblowersUK's account, despite the Department of Health insisting that no one should be prevented from speaking their mind.

A newsletter sent out to staff at one healthcare trust suggested subjects for tweets, such as thanking staff for their hard work on the crisis front line, giving tribute to retired NHS staff who had returned to the workforce, etc. It specified, however, that staff were to avoid "commenting on political issues, such as PPE”.

Another trust put up posters in hospital staff areas which told healthcare workers not to "make public appeals for equipment, donations, or volunteers", the BBC’s Newsnight found out.

The programme also quoted an unnamed doctor who had posted concerns about PPE shortages:

"They hauled me up in front of a panel of senior managers - it was very, very intimidating", he said, further indicating that the rhetoric he was instructed to pursue looked like a mantra:

"They kept on feeding me what felt like government type of lines, saying 'this hospital has never had PPE shortages' - which I know to be factually untrue. And that essentially I should stop causing a fuss".

"There have been colleagues who've died at my hospital. And there have been a handful more who've been in ICU (intensive care units)".

"It's very, very concerning that we can't even say our colleagues have died, please don't let us be next".

Another medical worker shared with the BBC that he and his colleagues had been warned by their manager that if they persisted in their effort to speak up they would get a "reputation" and "find it hard to get a job at that trust or others in the region".

"I was told we need positive messaging that suggested everyone in the NHS is working very hard, we are doing our best in the pandemic. I was told this is what we need to be putting out, not negative stories", the doctor detailed.

Meanwhile, the Department of Health and Social Care has publicly hoorayed the "whistleblowers'" efforts, with its spokesperson stressing those people "perform a vital and courageous service in ensuring safe care".

"If you have a transparent, open culture of reporting and people feel free that they can speak up about safety concerns, it saves lives", she argued, with her stance fully echoed by Georgina Halford-Hall from WhistleblowersUK:

"The system is completely broken", she insisted saying that the default position is an auto-immune response against the whistleblower” rather than the point he or she makes.

Over 100 medical staffers have reportedly contacted the group since March raising concerns about protective kits and their supplies for frontline corona workers.

According to the most recent estimates, 33,614 people have died of COVID-19 in the UK, including 24,100 in hospitals in England, with the overall number of infections approaching 233,200.

It emerged last week that millions of items in the British epidemic kit stockpile, including 80% of respirators at the NHS's disposal, were already out of date by the time the corona crunch hit the country in late January, according to a Channel 4 report.

The worrisome report coincided with a far-reaching debate over the UK’s order for Turkish-manufactured protective equipment, part of which had reportedly failed tests for safety standards and awaited further checks.

000000
Popular comments
Donald Trump and European, Brazilian racists have been negligent and willfully sacrificing own people's lives in order to smear China by not learning and preparing for the pandemics as well as by rejecting and criticizing Chinese equipments and helps.
Sir Percy
15 May 2020, 13:57 GMT3
000000
It's sounds like from North Korea or other third world country. Unfortunately this is not a rare occurrence. It happens more often by the day.