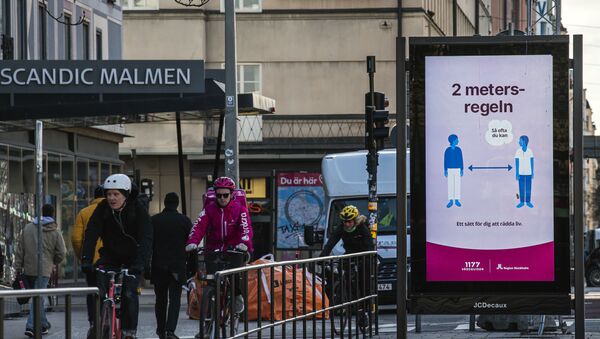 Owning to its maverick approach to battling COVID-19 with no lockdown, Sweden has been seen as an indicator of whether the so-called herd immunity approach works.

Björn Olsen, a professor of infectious diseases at Uppsala University, who has been critical of Sweden's no-lockdown coronavirus strategy since its inception, has once again called on the authorities to rethink their approach amid an extensive Spanish study that is seen as a severe blow to the idea of herd immunity.

In the extensive Spanish study, merely 5 percent of the over 60,000 people tested have developed antibodies to the novel coronavirus. Among healthcare professionals, the proportion is around 20-25 percent, despite Spain having by far the largest proportion of infected doctors and healthcare personnel in the world.

The data spurred Spanish experts into completely dismissing the idea of herd immunity.

"We have to realise that if a frequency of infection that seems to be almost 5 percent of the population has so far wreaked such havoc, a frequency of 60 percent would be downright catastrophic”, physician Joan Ramón Villabí told the Spanish newspaper El País.

Olsen called the “incredibly comprehensive” Spanish study credible and in line with what was previously seen in Wuhan, China.

“We must change our strategy, test more people and quarantine the infected. Otherwise, this will go on and more will die unnecessarily”, Olsen told the newspaper Expressen.

Tove Fall, an epidemiologist at Uppsala University, warned that the study didn't bode well for Sweden.

“Spain is one of the hardest-hit countries in the world. The fact that they are at such low proportions is not good news for us”, Tove Fall told national broadcaster SVT.

The Swedish strategy has been widely criticised among journalists and opinion makers, with Ivar Arpi of Svenska Dagbladet, one of the country's leading dailies, asking “How many must die for the sake of herd immunity?”.

Even the World Health Organisation (WHO) stressed that relatively few people have or develop antibodies, warning of a long battle ahead and cautioning against placing bets on herd immunity.

Meanwhile, the Swedish model of handling the coronavirus epidemic with no lockdowns in a largely business-as-usual mode has also been slammed abroad. Among others, Polish Prime Minister Mateusz Morawiecki called the Swedish model “Darwinist” and stressed that Poland hasn't even thought of introducing it. In the Polish media, Sweden is used as a scare example, with a high number of preventable deaths and triage to sort out patients with better chances of survival.

The Swedish authorities have repeatedly hailed herd immunity as the ultimate means to stop the spread of the novel coronavirus. While between 40 and 60 percent is thought as a prerequisite for herd immunity to work, a fresh study by the National Health Authority indicated that less than 1 percent of the population had an active infection as of late April. The corresponding figure in Stockholm, the country's most-affected city, was 2.3 percent. The Swedish authorities have meanwhile shifted their initial prognosis of reaching immunity from May to mid-June.

Relying mostly on voluntary restrictions, Sweden has so far seen nearly 28,500 confirmed cases and over 3,500 deaths.