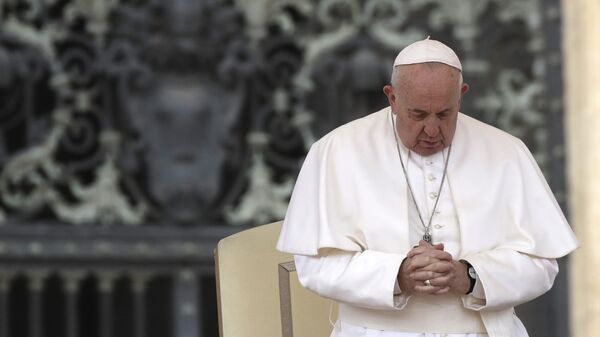 VATICAN CITY (Sputnik) - Pope Francis has decided to allocate $200,000 to support 400 scholarships in Lebanon, which has been facing an acute financial crisis, the Holy See said on Thursday in a press release.

“As a tangible sign of his closeness, the Holy Father, through the Secretariat of State and the Congregation for the Eastern Churches, has decided to send to the Apostolic Nunciature the sum of USD 200,000 to support 400 scholarships in Lebanon, in the hope of achieving a gesture of solidarity and with the desire that all involved at national and international levels will responsibly pursue the search for the common good, overcoming every division and partisan interest”, the Holy See said in a press release.

Pope Francis wants the Lebanese people to have access to education, especially in remote areas, as the country is facing a severe crisis that is causing “suffering and poverty”, according to the press release.

The Middle Eastern nation — one of the most indebted in the world — has been facing economic hardships long before the coronavirus pandemic happened. Its national currency plunged against the dollar last year, causing prices of bread and other necessities to soar. This prompted nationwide protests in October that unseated the previous government.

In late April, a new wave of protests began in Lebanon for all the same reasons — a sharp drop in the value of the local currency and an increase in food prices.  In response, the government endorsed an economic reform plan aimed at dealing with the nation's deepening financial crisis. The authorities are currently in talks with the International Monetary Fund to negotiate the recovery plan.