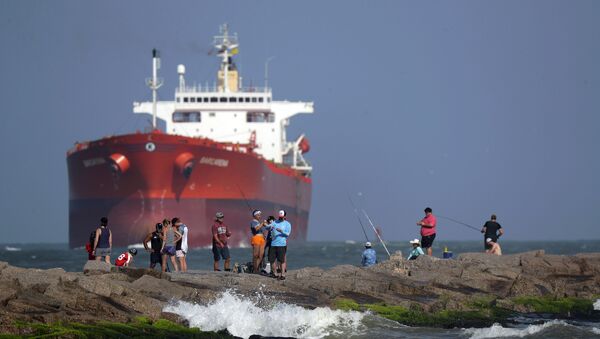 Global demand for oil is set for a record fall in 2020 as the coronavirus outbreak has crippled the aviation and shipping industry and massively reduced car usage. The glut of oil has seen a big dip in oil prices, which has meant much cheaper petrol and gasoline.

The International Energy Agency said on Thursday, 14 May, demand for oil had fallen by 8.6 million barrels per day (bpd), leading to a worldwide glut.

Although that is up 690,000 bpd compared to last month, it means huge amounts of pumped crude oil are being produced with nowhere to go.

Dozens of full oil tankers are at anchor off the coast of Ireland, Singapore, California and elsewhere.

Militaries at large won't have any need in storing crude oil because they don't have any possibility to refine it in the middle of a conflict. They can store products they need most, such as marine fuel oil, jet fuel, diesel, gasoline, etc. Here's San Diego. https://t.co/vRyue8SuTp pic.twitter.com/yT4oLrmswB

​​Henry Berry, managing director of TriStone Holdings, which invests in oil wells primarily in Kansas, said there was an estimated global storage capacity of seven billion barrels of oil and he said that, in mid-April 2020, it was at 60 percent capacity.

Mr Berry said: "If the present situation caused by coronavirus persisted indefinitely, then yes, there would come a point where there would be nowhere to store the oil.” 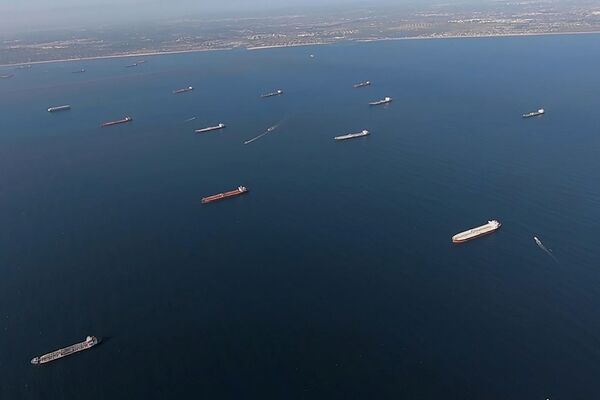 Some of the 27 oil tankers anchored off shore during the outbreak of the coronavirus disease (COVID-19) are viewed from a U.S. Coast Guard helicopter near Long Beach, California, U.S., in a still image from video taken April 23, 2020
© REUTERS / US COAST GUARD

But he said some countries - like China, Italy and South Korea - were reporting they were past the worst of the pandemic and governments were slowly lifting the lockdown.

Many oil production companies have also folded and Russia and Saudi Arabia have come to an agreement on cutting production, which has all led to a reduction in the amount of oil being pumped out of the ground.

"If that were the case, we’d see a surge in the oil price until the world caught up with the supply again to give a natural balance of production and oil price,” forecast Mr Berry.

The Paris-based IEA said: "Economic activity is beginning a gradual-but-fragile recovery. However, major uncertainties remain. The biggest is whether governments can ease the lockdown measures without sparking a resurgence of COVID-19 outbreaks.”

Mr Berry said demand in India, the world's fifth economy and a major oil consumer, was down by 70 percent, which equates to around 3.1 million bpd but he said India was now starting to relax their lockdown stance. 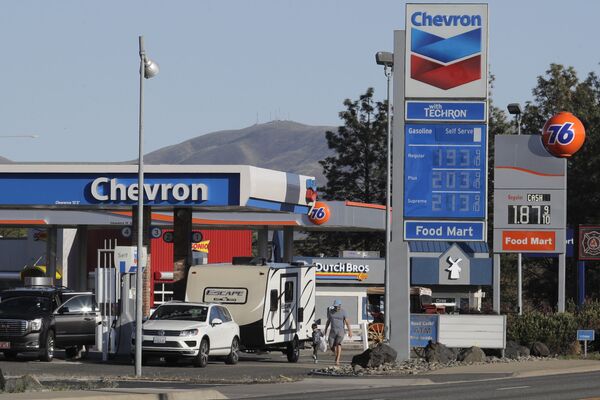 Petrol prices have fallen below £1 in UK and below US$2 in the United States
© AP Photo / Ted S. Warren

The huge reduction in demand has hit an industry which was already seeing increasing numbers of customers turn away from it because of the climate emergency and the switch to “green” energy sources.

Demand for electric and hybrid vehicles has been growing and several motor companies have pledged to phase out petrol and diesel cars.

While the big oil and gas companies could see the need to change their medium- to long-term plans, few were ready for such a precipitous fall in demand in the short-term.

So how easy is it to turn oil production on and off, considering that wells are pressurised? Can oil wells be capped and then uncapped?

The #CoastGuard shows us #Oil Tankers at anchor in Southern #California … https://t.co/ohHE25fytq pic.twitter.com/NKh97veXf0

​Mr Berry explained: “This would very much depend on various circumstances, including the type and depth of the wells. The bigger the well and the deeper the hole increases day-to-day running costs. If the oil price per barrel is lower than the break-even point for each barrel, then capping a well may be the only option.”

"If the price is there or thereabouts the break-even point, one may consider setting the pumpjack on a timer to produce at certain times and intervals of the day to temporarily decrease production,” he concluded.

"Capping, or closing, oil wells, and uncapping them, is not an overly complicated process for most Gulf oil producers, with crude easily accessible – a prime reason for a third of the world’s oil being produced in the region" https://t.co/l0MCSWLPBq

​TriStone, which is involved in the US oil industry, has been able to take advantage of the downturn in the market.

Mr Berry said: "While the present situation is far from ideal for us all, we are in a position to not only survive, but take advantage of the depressed oil downturn… We set our sights on smaller leases and shallower, less expensive plays. Our oil wells have a lower break-even price per barrel than most larger companies with deeper wells and march larger overheads."

As for the long-term, Mr Berry says the switch to renewable energy may be impossible for the world’s poorer countries.

"The conversion to wind, solar and hydro energy would be expensive and the costs…would likely be passed on to the consumer. The practice is some way off from the reality. Oil and gas is going to be required for sometime yet," he concluded.