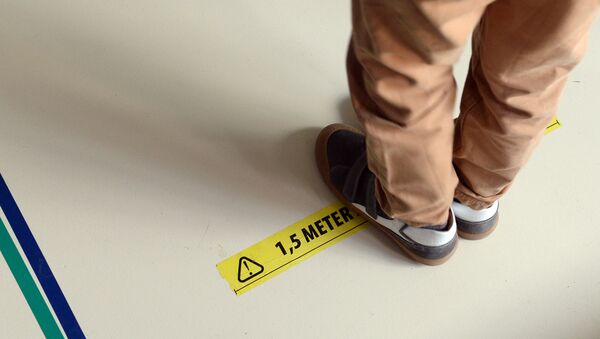 © REUTERS / Johanna Geron
Subscribe
Officials with the US Centers for Disease Control and Prevention (CDC) on Thursday issued an alert that an inflammatory disease which has appeared among children in recent weeks may be linked to COVID-19.

France on Thursday reported that a 9-year-old boy who had tested positive for COVID-19 had died due to MIS-C, marking the country’s first fatality from the illness. On May 9, New York Governor Andrew Cuomo also reported that three children in the state had died from the disease, and he said on Thursday that there were more than 100 known cases of the illness in New York.

According to the American Academy of Pediatrics, “clinicians should report suspected cases to their state, local or territorial health departments even if the patient also fulfills all or part of the criteria for Kawasaki disease.”

“MIS-C also should be considered in pediatric deaths with evidence of SARS-CoV-2 [the virus that causes COVID-19]. Health officials and specialists are monitoring the condition closely to learn more about risk factors and clinical course,” the notice adds.

“Parents really shouldn’t be afraid to take their child to their pediatrician if they’re worried they’re sick,” O’Leary said. “They should also, of course, make sure they are keeping up on their well-child care and their vaccinations. The diseases we prevent with vaccines are actually much more severe in children than COVID-19, so we want to make sure to protect children from those diseases.”

Even though the CDC has yet to provide treatment guidance, O’Leary has said that intravenous immunoglobulin and supportive care are options. Immunoglobulin therapy uses several different antibodies to treat various health conditions.