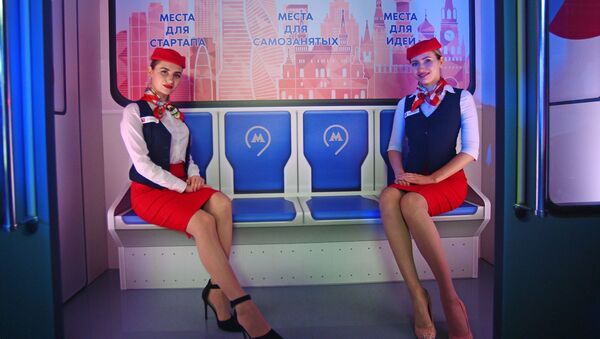 The first Moscow subway train left Sokolniki station on 15 May 1935. Back then, the whole system had only one line, consisting of 13 stations. 85 years later, it has become one of the largest underground systems, with more than nine million people using it on a daily basis.

The Moscow Metro, considered the most beautiful in the world, is celebrating its 85th anniversary. This underground kingdom, which consists of 14 lines and 238 metro stations, could make some of the most luxurious castles turn green with envy. Fountains, monuments, giant chandeliers, mosaics, columns, stucco work, tin-glazed pottery – it’s easier to name a thing that the Moscow Metro doesn’t have.

Its countless architectural styles have turned it into a major tourist attraction in the capital. As the city has changed, so has the Moscow Metro. Neoclassical architecture and the pompous Stalinist style of the 1930s gave way to Soviet avant-garde, which in turn gave way to modernism and postmodernism.

Here are the most interesting facts about the Moscow Metro.

Toss a Coin to… the Other Side of the Arch

While waiting for their friends, schoolchildren and university students at Mayakovskaya (named after Soviet poet Vladimir Mayakovsky) station passed the time by competing in strength by doing the following. They pressed a coin at the base of an arch and then tossed it up so that it would go all the way to the other base without falling. Incidentally, Maykovskaya invariably ends up on the list of the most beautiful Metro stations, according to foreign visitors. 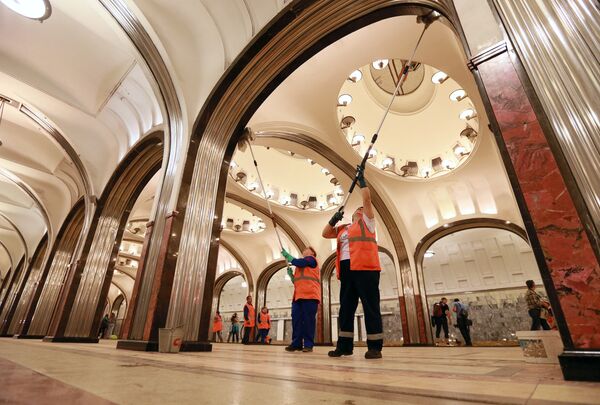 Children of the Underground

During the Second World War, the Metro was used as a bomb shelter. Reports say more than 200 children were born during airstrikes on the Soviet capital.

The Dog, The Shoe and The Rooster

Opened in 1938, Ploshad Revolutsii station (Revolution Square), as one may have guessed, is dedicated to the October Revolution of 1917. The station features 76 bronze statues depicting soldiers, peasants, workers, parents with children, and athletes. Upon opening, it quickly won the hearts of the Soviet people, who even came up with rather sweet traditions. Single ladies and men rub the shoes of bronze women to get a date. If one wants financial success, one has to rub the comb of a rooster. Students who spend days and nights preparing for exams rub the nose of a dog statue to pass the test (if one wants to get an A, it should be done with the student’s grade book). If you want to defend a graduation thesis, then put on your jogging sneakers, because according to tradition, one has to get out of the subway train, rub the noses of FOUR dogs, and then return to the same train. 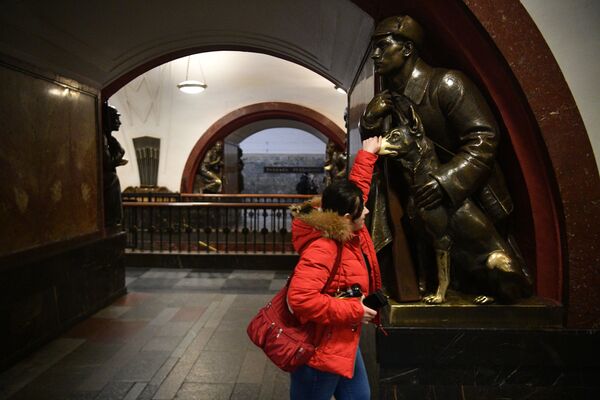 Speaking of dogs. Mendeleyevskaya station (named after Russian chemist Dmitri Mendeleev, who created the periodic table of elements) features a monument called "Compassion", dedicated to the humane treatment of stray dogs and animals. The monument depicts a dog called Kiddo, which lived in the underground passageway. It was killed by a woman, the owner of a pedigree dog, after Kiddo started barking at her.

Don’t worry, technically no one was harmed or killed in this station. Dostoevskaya station (named after famous Russian author Fyodor Dostoevsky) features scenes from his most acclaimed works. One of the walls depicts the killing of Nastasya Filippovna from the novel The Idiot. Another shows the Rodion Raskolnikov from Crime and Punishment killing a pawnbroker, and the third shows the killing of Shatov and the suicide of Stavrogin, characters from the novel Demons. 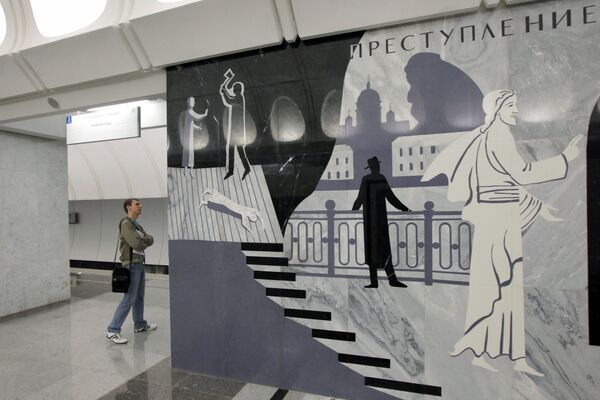 We have to be honest, like in other megalopolises: a subway ride in Moscow can be quite stressful due to the large number of people jostling about and stepping on your foot. But even in this storm of people, there is a place for something subtle and graceful. In 1997, the late Alexander McQueen presented his collection for Givenchy at Sokol station. The show featured British supermodel Naomi Campbell. Since then, the capital’s subway has frequently been used for catwalks.
Incidentally, not only fashion designers are willing to showcase their impressive outfits in the Moscow Metro. In 2014, Muscovites created a community on the VK social network where they post photos of people wearing stylish and flamboyant outfits.

In 1997 Alexander McQueen’s collection for @givenchy was presented in the depo of the Moscow Metro (subway). The station wasn’t closed, the passengers could see the models passing by. #History #BackToTheFuture #fashion #moscow #AlexanderMcQueen pic.twitter.com/9V5N4ChgEd

If you ask a Muscovite how to get to the Sovetskaya (Soviet) station, you will likely get no answer and the reason is that it doesn’t appear on the map. The station was part of the second line and was built under Mossovet, the city’s administration. According to rumours, right after it was built, Soviet authorities ordered it to be closed and that information on it be kept secret.

A lot has been said about the beauty of the Moscow Metro, but have you heard about the most austere (banal) station? According to Muscovites, it is Rizhskaya (named after the Latvian capital Riga). It was built under Soviet leader Nikita Khrushchev, when Stalinist chic and pomp was criticised. You won’t see mosaics and complex stucco work, just simple ornaments showing notable buildings in Riga.

​Below you can see stations that according to Muscovites and tourists are considered the most beautiful. 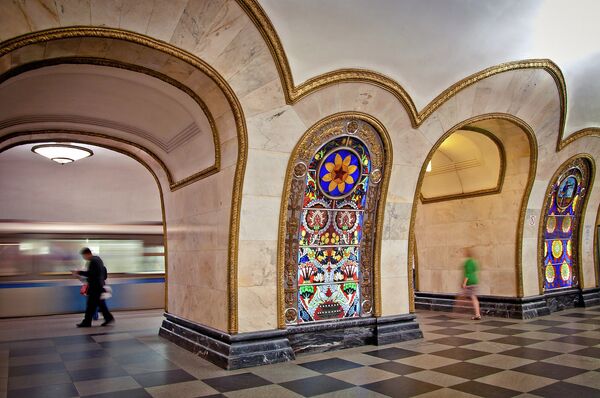 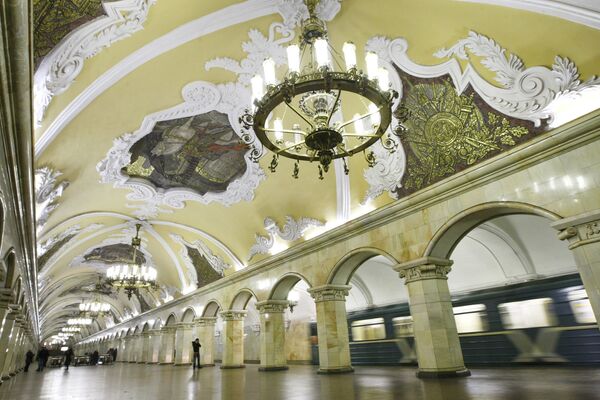 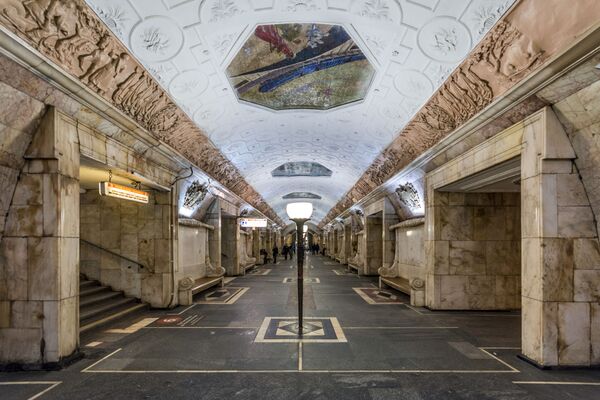